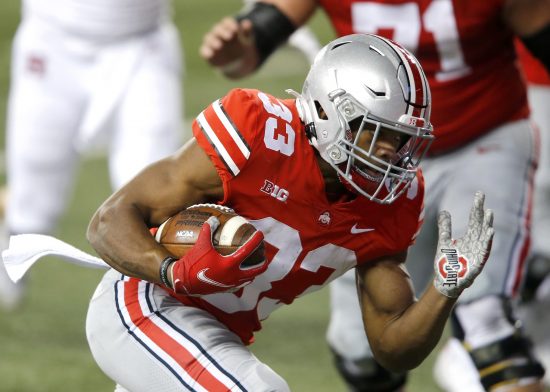 The Buckeyes and Hoosiers prepare for a top ten matchup.

No. 3 Ohio State (3-0) hosts No. 9 Indiana (4-0) in a battle of unbeatens in the Big Ten. The Buckeyes were expected to be here, as they’ve been the conference’s premiere program over the last decade. Indiana, on the other hand, has been a bit of a surprise, knocking off Big Ten powers Michigan State, Michigan and Penn State over the first month of the season.

Who will escape Columbus unscathed?

The Buckeyes have been dominant on offense through their first three games, averaging 46.3 points a contest. Led by Heisman hopeful Justin Fields, the group ranks fourth in the nation in scoring, and 13th in total yardage. Fields has thrown as many touchdowns (11) as he has incompletions, and has posted 300-yard games in each of his last two appearances.

Helping Fields out are running backs Master Teague and Trey Sermon, who spearhead a rushing attack that runs for 208.7 yards a game. Pass catchers Garrett Wilson and Chris Olave, who’ve combined for 623 receiving yards and six touchdowns, pace the offense on the outside.

On defense, Ohio State has given up some points, allowing an average of 23 a contest. The unit ranks fifth in the Big Ten in both points and yards allowed. The defensive backfield has been a bit susceptible to the pass, giving up over 220 yards a game. They could have their hands full when facing an Indiana passing attack that averages 267.5 yards an outing.

Indiana has been the surprise of the conference, knocking off Michigan State, Michigan, and Penn State over their first four games. After winning an overtime thriller in the season opener, the Hoosiers have outscored their last three opponents by a total of 99 to 42. That includes pitching a shutout against the Spartans their last time out.

The defense has been strong, surrendering just 19.3 points a game. They rank fourth in the conference in yards allowed, despite having faced three of the league’s top six offenses. A ball-hawking secondary has picked off eight passes through four games, while the front seven has already tallied 12 sacks. They may have enough talent up front to make Justin Fields uncomfortable.

On offense, Indiana is led by quarterback Michael Penix, Jr. He’s thrown for 1,070 yards and nine touchdowns, while adding a couple more scores on the ground. His favorite targets have been Ty Frofogle and Whop Philyor, who both have 24 catches on the season. Frofogle has a team leading four touchdown receptions, and he’s averaging nearly 18 yards a catch.

The rushing attack has been a bit pedestrian, as the Hoosiers only run for 95.3 yards a game, the third worst mark in the Big Ten. Hoosier running backs are only getting 3.6 yards a pop, and have broken just one run longer than 20 yards. Still, lead back Stevie Scott III has reached paydirt on five different occasions. They’ll need Scott to have a productive game versus the Buckeyes, as the Ohio State pass rush will swarm Penix if the offense becomes one-dimensional.

The Buckeyes have not lost to the Hoosiers since 1988, going an impressive 26-0-1 in that span. Each of the last four matchups in the series has been decided by 21 points or more, with the Buckeyes taking down Indiana 51-10 in their most recent meeting.

Ohio State is favored by 20.5 points, which seems like a lot considering they’re facing a foe ranked in the top ten. It goes to show the respect that oddsmakers have for a talented Buckeye group. OSU is 2-1 so far against the spread, while Indiana has posted a perfect 4-0 mark.

The game will hinge on the Hoosiers being able to slow down the high-powered Buckeye attack. If Indiana can force Fields into some mistakes, an upset could be in the works. If he’s able to get into a rhythm as he has in his first three games, things could get away from Indiana quickly, and they may not have the offensive firepower to keep pace.

We’re going with the latter, and expect the Buckeyes to continue their dominance of the Big Ten as they march towards a playoff appearance.