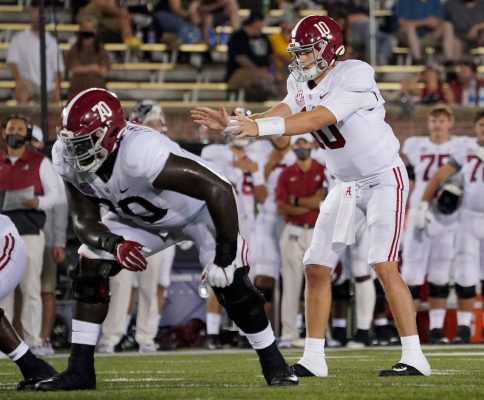 The force that is the #1 ranked Alabama Crimson Tide (6-0) continues to roll forward in what should be a very winnable game against the Kentucky Wildcats (3-4). Of course getting complacent as 30-point home favorites is how teams get into trouble, but the Tide seem simply just too dominant to let that happen.

The Wildcats are definitely facing a mismatch on Saturday afternoon, but UK did rise to the occasion in a similar game while falling just 14-7 to Georgia in week 9. Mark Stoops can take some solace from that game vs. the Bulldogs, but it was at home and Georgia might not be as good as we thought at the time. Going on the road to Tuscaloosa is a whole different ballgame.

Kentucky will be coming into Saturday’s game off of a win, but it was a rare victory that might have raised more questions than answers. The Wildcats beat Vanderbilt 38-35 at home last week, but as -17 point favorites. Granted two TDs from the Commodores with less than 4:00 left made the final score look closer than it was, but that’s also a Vanderbilt team that is 0-6 on the season.

Kentucky did manage 308 yards rushing on just 35 carries vs. Vanderbilt however. Saturday’s game will likely more closely emulate the Georgia game for the Wildcats offense, where they posted 138 yards rushing and just 91 through the air. The Alabama defense shut out Mississippi State in their last game, and will be rested after being idle in week 10 due to positive COVID tests from LSU.

Expect Alabama to be chomping at the bit after the ballyhooed game with defending national champion LSU was postponed last Tuesday. That doesn’t bode well for Kentucky on either side of the ball.

What we could see from Alabama on Saturday is a stat padding game as both QB Mac Jones and RB Najee Harris are in the running for the Heisman trophy. Jones is neck-and-neck with Ohio State’s Justin Fields for the coveted award, and the Alabama QB has 16TD to just 2 INT on the season. Jones has thrown four TDs in two of the last three Crimson Tide games as well.

Don’t count out Harris for a big afternoon against the Wildcats either though, as the RB had three TD runs in the win over Tennessee and ran for 200+ yards and 5 scores against Mississippi. While the Alabama offense will almost assuredly get theirs (40+ points in five straight games), it will ultimately be up to the Crimson Tide defense on whether the 30-point spread can be covered. The Tide held Mississippi State to 37 yards rushing in their last game, and the Tigers’ Air Raid offense was grounded with just 163 yards passing.

We’ve come to expect at least 45 points from the Alabama offense each week, and three TD spreads or greater haven’t proven to be an issue the last two games with 31 and 41 point wins. Kentucky’s offense doesn’t invoke a lot of confidence that they can keep this one within the margin after being held to 14 points or less in two of the last three. That being said, the Iron Bowl matchup with Auburn is next week, so we’re looking for the Tide to be a little bit in look-ahead mode.