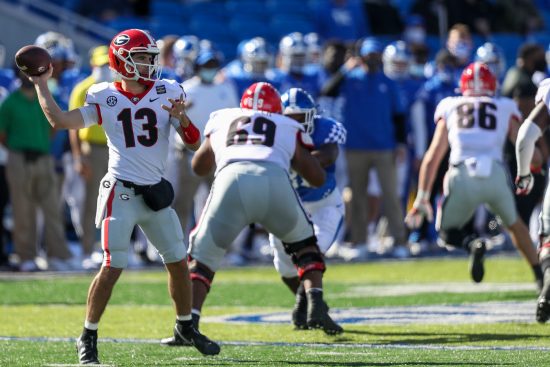 A battle of the Bulldogs takes place Saturday with both teams trying to get back on track.

Georgia (4-2) welcomes Mississippi State (2-4) to Athens this weekend, hoping to recover from a 44-28 setback to Florida their last time out. Georgia has now lost two of their last three games, albeit against the SEC’s front runners for the SEC championship game.

Mississippi State, on the other hand, earned their first win since week one, taking down Vanderbilt 24-17 two weeks ago. Both teams are returning from off weeks after having games cancelled due to COVID.

Who will emerge victorious in this SEC showdown?

Georgia Defense Hoping to Bounce Back

The Georgia defense was embarrassed last game by a high-flying Florida passing attack. Gator quarterback Kyle Trask threw for four touchdowns and led the Florida offense to a 571-yard performance.

It was by far the worst outcome for a Georgia defense that’s been the SEC’s best all year. The group still leads the league in points allowed (20.8 pts/gm) and ranks second in total defense (345.7 yds/gm), but will need to play much better against Mississippi State’s air raid offense.

The Bulldog offense needs to elevate their play, too, particularly at the quarterback position, where Stetson Bennett is coming off a 5-for-16, 78 yard performance. He was pulled in the second half of the Florida game after suffering a shoulder injury, and it now looks like transfer JT Daniels will make his Georgia debut.

Daniels may struggle to find room passing against a Mississippi State secondary that ranks second in the SEC in yards allowed, but he should benefit significantly from a Georgia running game that ranks fifth in the conference in production (173.5 yds/gm). Zamir White leads the way with 509 yards and seven rushing touchdowns.

Mississippi State earned its second win of the season with a win over Vanderbilt last time out. Quarterback Will Rogers threw for 226 yards in his second start of the year, and the Bulldog defense forced five Commodore turnovers.

Rogers has looked decent in limited time after taking over for KJ Costello. He played poorly in his first start versus Alabama, throwing two picks in a 41-0 loss, but made some plays in the Vanderbilt game to help his team pull out the close win.

Mississippi State and head coach Mike Leach employ an air raid offense that ranks fifth in the league in passing (303.2 yds/gm), but they have completely abandoned the ground game, ranking dead last in the SEC in rushing.

Georgia’s pass defense has been vulnerable at times this year, so Mississippi State may be able to find some success.

Georgia is breaking in a new quarterback and will likely rely heavily on its run game to keep the chains moving. Mississippi State has been flat out bad since week one, but they may be able to find some wiggle room in the Georgia secondary. Expect Mississippi State’s defense to keep the team in the game, but look for Georgia to leave with the win.

Georgia’s offense has struggled over its last three games, averaging just 19.7 points a game in that stretch. Even in a 14-3 win versus Kentucky, the unit looked very underwhelming. A new face at quarterback may not be able to help them.

Mississippi State, too, has struggled on the offensive side of the ball, ranking 13th in the league in scoring (16.3 pts/gm). That number drops to an abysmal 10.8 points per game if you remove the 44-34 season opening win over LSU.

Both teams’ defenses rank among the SEC’s top three, so points may be hard to come by. Take the under.