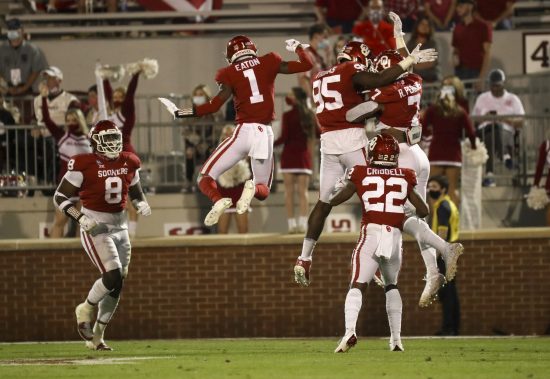 Oklahoma State travels to Norman in the latest edition of the Bedlam series.

No. 18 Oklahoma (5-2) and No. 14 Oklahoma State (5-1) continue their rivalry this weekend as the Cowboys travel to Norman to take on the Sooners in the 107th edition of Bedlam. Oklahoma owns a strong 81-18-7 series advantage, and has won five straight matchups going back to 2015.

Cowboys Will Lean on Run Game, Defense to Pull Upset

The Cowboys will try to lean on that defense as they face a Sooner offensive group that’s been the most productive in the conference. It will be a matchup of strength on strength, and the Oklahoma State defensive front will look to make freshman quarterback Spencer Rattler uncomfortable.

Attempting to help out that Cowboy defense will be a strong run game led by Chuba Hubbard. Hubbard ran for more than 2,000 yards a season ago, but has had a little tougher time finding running room this year. Still, he ranks third in the conference in rushing at 96.8 yards a game. If he can be effective, it will help keep Oklahoma’s top ranked offense on the sidelines.

Oklahoma, led by freshman quarterback Spencer Rattler, leads the Big XII in total offense (515 yds/gm). Rattler, in particular, has played much better over the last month of the season, following losses to Iowa State and Kansas State early in the year.

In the Sooners’ four game winning streak, Rattler has thrown for 260 yards a game, tossing eight touchdown passes along the way. He has the offense scoring at a clip of 52.5 points a game over the last month.

Of course, Rattler hasn’t been doing it all. He’s had help from his pass catchers, with receivers Theo Wease, Austin Stogner, and Marvin Mims each having hauled in 25+ catches for at least 360 yards. The ground game has been productive, too, ranking fifth in the league.

The Sooners have won five straight in the series, with four of those victories being decided by 10 points or more. Oklahoma has also won seven of the last eight when the game is played in Norman. Stick with the Sooners to continue this trend, as they’ve looked like the better team over the last few weeks.

This series is typically high scoring, with 16 of the last 18 meetings hitting 50 points or more. Ten of those matchups have gone over 60 points, which is where the line currently sits.

Both of these defenses have been stout, but the offenses have been better. The Sooners have been rolling of late, and shouldn’t slow down too much, while the Cowboys should also be able to find a little success moving the ball. It may not be able as high scoring as some games in the past, but should still eclipse the 59.5-point mark.