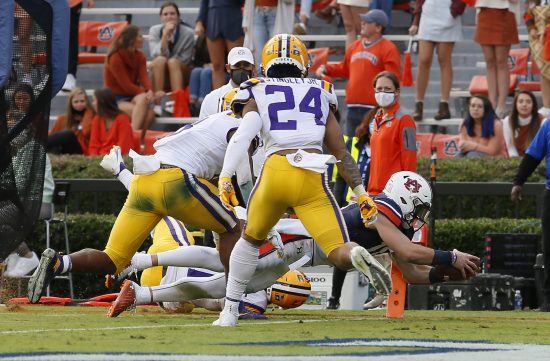 The Volunteers travel to Auburn in an SEC showdown.

Tennessee returns to the field Saturday looking to end a four-game losing streak. After beginning the season 2-0, the Vols have dropped SEC matchups to Georgia, Kentucky, Alabama, and Arkansas.

Auburn, on the other hand, is see a different season trajectory. After a loss to South Carolina in late October, the Tigers have reeled off consecutive wins over Ole Miss and LSU.

Will the Tigers continue their winning ways or will Tennessee put an end to the streak?

Can Tennessee’s Offense Get Back on Track?

The Volunteers started the season off with back-to-back wins in which the offense posted 30 or more points. Since, they’ve averaged just 14.5 points a contest. The Vols led 21-17 midway through their game with Georgia, but since that moment, Tennessee’s been outscored by a total of 133 to 37.

Quarterback play has been an issue, with inconsistency plaguing the Volunteer offense. Stater Jarrett Guarantano has failed to eclipse the 100-yard mark in two of his last three outings, which resulted in his being benched midway through the Arkansas game. His replacement, Harrison Bailey came in and promptly threw two picks.

While the quarterbacks have had their issues, the Vols still have one of the best tailback tandems in the SEC. Eric Gray and Ty Chandler have teamed up to run for more than 125 yards a game.

The Vols have struggled on defense, allowing 31.5 points a contest. That number has ballooned to 37.5 points an outing in its current four-game losing streak.

The Tigers have been up and down on offense this year, but seem to have straightened some things out over the last month of the season. Since a loss to Georgia in early October, Auburn has averaged 33.8 points a game.

Bo Nix leads the offensive attack, who’s thrown for 1,407 yards on the year, while adding another 274 on the ground. Outside of a three-interception game against South Carolina, he’s been careful with the football, and has the Tigers on a two-game winning streak.

Nix gets a ton of help from his supporting cast. Tank Bigsby is having an outstanding freshman season, and is currently the SEC’s seventh leading rusher. Seth Williams is one of the most talented pass catchers in the nation, hauling in 28 receptions for 511 yards on the year.

The Auburn offense should be able to successfully move the ball on a Volunteer defensive unit that ranks eighth in the league. They’ve been particularly vulnerable against the run, allowing more than 160 yards a game.

The Tigers should be able to control the clock and the game with a strong rushing attack. Take Auburn.

Auburn has been on fire offensively, hitting the 30-point mark in three of their last four matchups. They’ve also had two weeks off, which should mean they’re will rested and prepared for the Vols. Tennessee has struggled offensively, failing to score 20 points in any of their last three outings.

The over/under is set at 50.5 points. It may be hard to reach that mark if the Vols continue to struggle. Take the under.