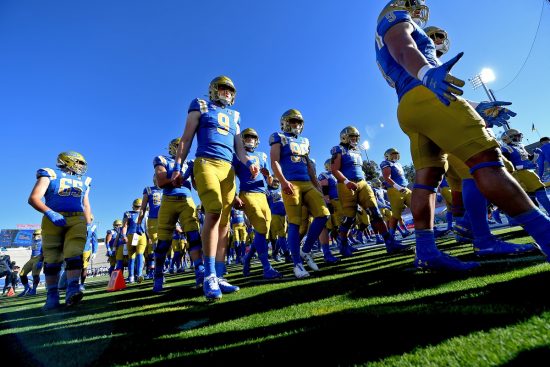 As they appear to be the Pac-12’s only chance of getting into the College Football Playoff, Oregon looks continue their winning ways in the conference’s delayed start season against a pesky Bruins team.

Slow Starts for the Ducks So Far

With just two games played, it is unclear what to make of Oregon considering they played an overrated Stanford team, dismantling them 35-14 .Yet they were down 7-0 at one point and the Cardinal’s missed 4 field goals throughout game resulting in great field position for the offense and allowing them to pull away late. On last Saturday’s game against the Washington State Cougars it looked like the Ducks had shaken off the slow start and scored a touchdown midway through the first quarter. However they wouldn’t score again until the end of the half, allowing the Cougars to take a 19-14 lead into the locker room. It wasn’t until again the offense finally got back on track, scoring 29 points in the second half, that they were able to pull away for a win.

If the Ducks want to improve to 3-0, they have to start fast and be consistent as they face a UCLA defense who rebounded after giving up 48 points to Colorado, mainly because the offense turned the ball over four times in the first half, by giving up just 10 to Cal last week. More importantly, the Bruins shutout the Golden Bears in the second half, a time Oregon desperately needed to come back and win last week.

When comparing these teams through two games, a lot of the stats look identical. Oregon averages more offense by a point compared to the Bruins, averages about 80 more yards as well and only 20 more yards passing. Even the two quarterbacks have thrown the same number of interceptions and one back just has three more carries than another.

However what I think the key will be is the Bruins’ pass defense. They have given up an average of less than 200 yards of it while Oregon is close to giving up a 300 average including over 400 yards of total offense. The Ducks went pass heavy in their second half comeback last week because they needed to make up points fast, if the Bruins can limit that and force the run, it will slow the game down enough for the chance at an upset.

Oregon: Starting fast and not letting up. Colorado showed that even when it went up big against UCLA they fought back and made it close ending up in a shootout loss. So starting slow is not an option for this Ducks team and certainly cannot let the Bruins hang around.

UCLA: Consistency. Like I said, UCLA found themselves down 14-35 at half time against Colorado yet dug themselves out of a hole only to lose again. Flipping the script, they went up 27-10 against a favored Cal team last week then never looked back in the second half. If the team from last week shows up to play Oregon this could be a fun game.