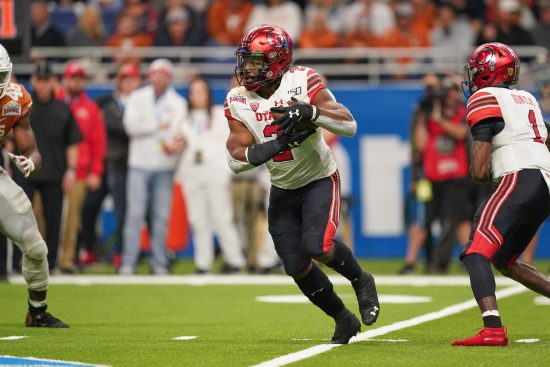 Southern Cal travels to Utah in this PAC 12 matchup.

USC is off to an early 2-0 start, though those wins haven’t come without drama. The Trojans scored two touchdowns in the final three minutes of their season opener to escape with a 28-27 win over Arizona State. They followed it up with a 34-30 defeat of Arizona, where they scored the game-winning touchdown with just 25 seconds left on the clock.

Utah, meanwhile, has yet to play a game, having had their first two matchups cancelled.

Who will get a leg up in the PAC 12 championship race?

USC has escaped with two wins, but could easily be in an 0-2 hole if not for some late game heroics. Still, wins are wins, and the Trojans sit atop the PAC 12 South division three weeks into the year.

The offense has carried the team, ranking second in the conference in total yardage (527 yd/gm). Quarterback Kedon Slovis leads the league in passing, having thrown for more than 300 yards in each of his first two games. The Trojans also have three of the league’s top five pass catchers in Amon-Ra St. Brown, Tyler Vaughns, and Drake London. Each has hauled in at least 12 catches.

The Trojan defense has been less than impressive, allowing 418 yards and 28.5 points a game so far this year. They’ll need to shore some things up when facing a Utah offense that ranked fifth in the PAC 12 last season.

Utah will be playing its first game of the year, after having its first two contests cancelled due to COVID. Last year’s group scored 32.3 points a game on offense, while its defense led the conference in scoring, allowing just 13.2 points to opponents on average.

This year, the Utes will have new faces at quarterback, running back, and on defense. Jake Bentley (South Carolina transfer), Cameron Rising (Texas transfer), and Drew Lisk are all listed as QB1 for the Utes. Whoever makes the start will be teamed up with a newcomer in the backfield, as running back Zack Moss is off to the NFL.

The defense was the strength of this team last season, leading the Utes to a PAC 12 championship game appearance. They’ll look to do the same again in 2020, and knocking off division leading USC is the first step in repeating as PAC 12 South champs.

USC is favored, even though they’ve looked less than impressive in their first two games, and they’ll be travelling to Utah to play a road game in what’s shaping up to be chilly conditions. The game time temperature is looking to be below 30 degrees.

That may set up perfectly for Utah, who likes to win with defense and a strong running game. We’re taking Utah to pull the upset.

USC has proven they can score, but they haven’t faced a defense as good as Utah’s yet this year. Look for the Utes to lean on its running backs and a solid defensive performance. The over/under is set at 58. Three of the last four meetings between these two schools have totaled 58 points or less. Take the under.