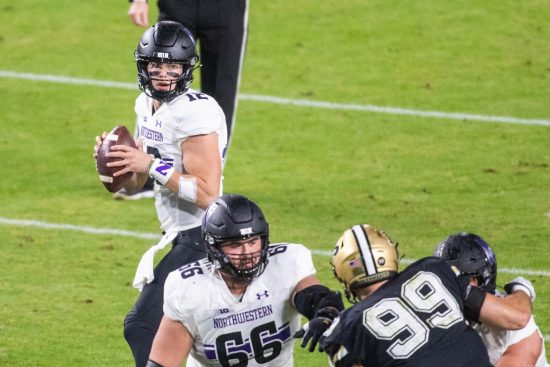 Wisconsin and Northwestern meet in a matchup of unbeatens in the Big Ten.

Wisconsin (2-0) will travel to Evanston, Illinois to take on Northwestern (4-0) as both teams look to retain their unblemished records and gain a leg up in the Big Ten championship race.

The Badgers are fresh off of a beatdown of Michigan, taking down the Wolverines by a score of 49-11. The Wildcats, meanwhile, have won close games in three straight weeks, escaping with victories over Purdue, Nebraska, and Iowa.

Wisconsin enters the matchup having run a buzzsaw through Michigan and Illinois over its first two games. The Badgers have outscored their opponents by a total score of 94 to 18.

Led on offense by a potent rushing attack, the Badgers are averaging 261.5 yards a game on the ground.  That number easily ranks first in the Big Ten, as does the 47 point per game average that Wisconsin has posted in its first two contests.

What’s been most impressive about the Badger attack is that they’ve been able to run the ball with a multitude of different players. Wisconsin currently has five rushers that average at least 35 yards a game running the football. They’ve also seen five different player score touchdowns on the ground, including two tailbacks, two fullbacks, and a receiver.

The passing attack hasn’t been quite as potent, but it’s mostly been due to the fact that they’ve not had to use it. Graham Mertz has thrown for 375 yards and seven touchdowns, while completing 75% of his passes. He’s been efficient and safe, protecting the ball and leaning on the ground game.

On defense, the Badgers have allowed just nine points a game, which ranks first in the conference. Their two prior opponents, Iowa and Michigan, both have more productive offenses to date than Northwestern, though the Wildcats have seen some success on the ground.

The Wildcats will try to slow the Wisconsin offense and play a game of clock management and field position as they look to pull the upset.

Northwestern’s defense has been their strength, ranking second in the Big Ten in total yardage. They’re allowing less than 100 yards a game to opposing rushing attacks, and will hope for similar results against the Badgers.

On offense, Northwestern is led by a three-headed rushing attack that includes running backs Drake Anderson and Isaiah Bowser, and quarterback Peyton Ramsey. All three players have over 120 yards on the ground.

Much like Wisconsin, the Wildcats have been successful running the ball in a variety of different ways, with six different players having scored touchdowns. If they can get the run game going, they won’t have to rely on a passing attack that’s been susceptible to turnovers (4 INTs).

Wisconsin is favored by just over a touchdown, after having blown out two of the conference’s most notable programs. No one has been able to slow the rushing attack, though Northwestern should be the stiffest test.

These two teams have split the last six meetings, with Wisconsin taking last year’s matchup by a score of 24-15. In those six meetings, only two have exceeded 40 points between, and we could be in for another low scoring matchup with both teams relying heavily on the run game and solid defense.

We’re expecting the Badgers to establish a lead early and continue their run to the Big Ten championship game.