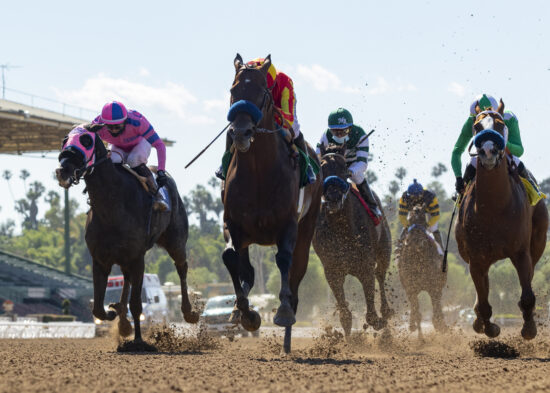 There was no denying that the story of the weekend came in the San Felipe stakes at Santa Anita on Saturday afternoon. Bob Baffert-trained Kentucky Derby’s favorite Life Is Good was in excellent form as he claimed success in that race. The most pleasing factor for trainers and supporters of the horse was how controlled the performance was throughout. He led from the first furlong and never looked troubled throughout his prep run.

Baffert claimed after the race that the horse was ‘exceptional,’ and he is clearly the one to beat heading into the Kentucky Derby later in the year. His closest rival on Saturday was Medina Spirit, but in truth, his stablemate never looked like getting near his rival, as he finished eight lengths behind. Dream Shake finished a place further back, while Roman Centurian finished in a distant fourth.

The biggest priced winner of the day came in the Gotham Stakes at Aqueduct, as 47/1 shot Weyburn claimed an unlikely win. The James Jerkens-trained horse won on his first start last time out, but he wasn’t given much chance of backing that up with another win in the Grade 3 encounter on Saturday. However, his performance would certainly be one that would make gamblers look up and take note, as he showed excellent character to hold on to the win and win by a nose.

Crowded Trade was the horse that finished closest to the massive outsider; while heavy favorite to win the race, Highly Motivated finished one and a quarter lengths behind the winner. Connections for the horse will now be hoping that Weyburn could be set to line-up for the Kentucky Derby, but the team will need to pay the $6,000 entry fee if they want to nominate the three-year-old for a spot in the illustrious Triple Crown event later in the year.

There was a massive decision made regarding the two-time Grand National winner Tiger Roll late last week, as connections revealed that he would not be targeting a record third success at Aintree. Michael O’Leary made the decision to pull the eleven-year-old out of the race, as he cited the handicap as his reason for doing so. The decision came just a day before it was announced that Tiger Roll’s trainer Gordon Elliott was given a six-month ban for the sickening picture of him sitting on a dead horse circulated online.

Meanwhile, there is now a clear favorite for the Grand National next month, as Cloth Cap won a comfortable prep run at Kelso. The Jonjo O’Neill trained horse is now a clear +1400 favorite with MyBookie to win the illustrious race.