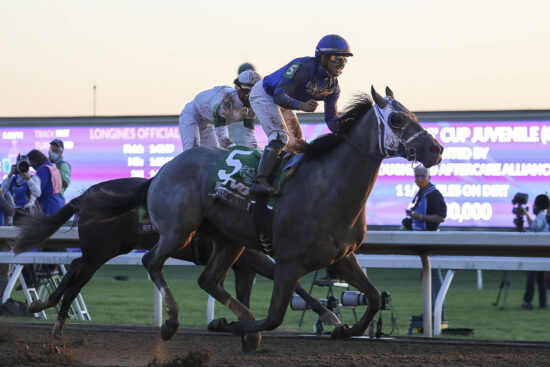 It has been a busy seven days in the world of racing, with the action on the track around the world captivating audiences. In the United States this past weekend, there were some more competitive races, with United and Hot Rod Charlie among the winners.

Saturday’s action at Santa Anita was all about United’s return to the track. The six-year-old was disappointing at the Breeders’ Cup late last year, as he wasn’t able to keep track with the horses involved in the Breeders’ Cup Turf.

However, there were no lingering signs of damage to form on Saturday in the San Luis Rey Stakes, as the six-year-old roared to success in the Grade 3 race. United was ridden home by Flavien Prat in the race, as he kept tracks on the leader before motoring home to win by three-quarters of a length.

Also, on Saturday, Hot Rod Charlie was back in action swiftly after changing trainers. The three-year-old had only been at Leandro Mora’s yard for less than a week before lining up for the Louisiana Derby on Saturday, and the three-year-old was quick to show that he shouldn’t be ruled out for the upcoming Kentucky Derby later in the year.

Joel Rosario rode Hot Rod Charlie home by two lengths from Midnight Bourbon to claim an impressive win. The victory immediately saw his odds for the Kentucky Derby drop to +800, and on that form at his new yard, he could be one that gamblers should be keeping an eye on for the Triple Crown events.

Other Notable Results Over The Weekend

There was also Grade 3 action at Gulfstream Park this past weekend, with Pacific Gale claiming the success in Hurricane Bertie Stakes. Chess Chief also claimed a dominant win at Fair Grounds over the weekend in the Grade 2 New Orleans Classic Stakes. There was also success for trainer Todd Pletcher with Colonel Liam in the Grade 2 Muniz Memorial Classic Stakes at Fair Ground, while Travel Column picked up a win for trainer Brad Cox in the Fair Grounds Oaks.

The biggest four days of the National Hunt season in the United Kingdom and Ireland took place last week, and despite the Cheltenham Festival going ahead under intense pressure following the Gordon Elliott scandal, it was an emotional week with no shortage of stories. Undeniably, Rachel Blackmore was the star of the show, as she became the first-ever female jockey to end the Festival as the top jockey. Her biggest wins of the week came on board Honeysuckle in the Champion Hurdle and Allaho in the Ryanair Chase.

One of the stories of the Festival came on a Wednesday, as dual-Grand National winner Tiger Roll returned to form with an excellent display in the Cross Country. However, the featured race of the meeting went the way on Minella Indo for trainer Henry De Bromhead, who celebrated a famous one-two in the Cheltenham Gold Cup.