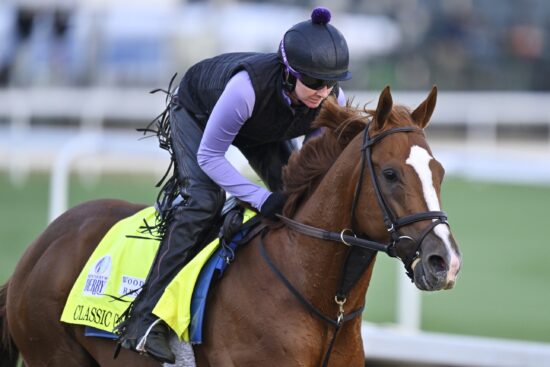 The excitement of the summer meet at Saratoga continues this weekend, as there are four graded races to look forward to. We already looked ahead to the Whitney Stakes in our Breeders’ Cup Challenge preview, but we will run through the form of the other three graded races at the track here.

While the Test Stakes isn’t a part of the Breeders’ Cup Challenge, it does still help us assess some of the possible contenders in the Filly & Mare Sprint later in the year. The betting indicates that it should be plain sailing for Matareya this weekend, as the Brad Cox-trained runner is a -350 chance.

She has been perfect so far this year, winning the G1 Acorn and G2 Eight Belles at Belmont Park and Churchill Downs, respectively. She also landed the G3 Beaumont Stakes in April at Keeneland, indicating that she will have a strong chance at the same track later this year. The rail is a slight concern this weekend, but she boasts speed figures that very few others in this race can hit.

Elm Drive is yet to really make the grade in this company so far this year, finishing third in the G2 Great Lady M last time. Those looking for an interesting place selection may be intrigued by November Rein. She was a winner at Saratoga last year in the Seeking The Ante Stakes, and produced a really strong run at Belmont last time out, reaching a speed figure of 102. She’s likely not good enough to win, but a second-place finish could be within her reach.

The Saratoga Derby looks like a fascinating race this weekend, and could give us an early insight into potential runners in the Breeders’ Cup Turf later in the year. Classic Causeway romped home in the Belmont Derby last time out, which was an excellent return to form for the Kenneth McPeek-trained horse on his first start on the turf.

However, this is a much more difficult assignment this weekend with two leading European trainers well represented. They look to set the form here. Stone Age, for Aidan O’Brien, didn’t get to run his own race in the G1 Belmont Derby, but a third-place finish was still a decent showing. He finished sixth in the G1 Derby at Epsom in June, and was a winner of the G3 Derby Trial at Leopardstown in May.

However, the preference is for the dream team of William Buick and Charlie Appleby with Nations Pride. Like Stone Age, he needed to battle after not getting the best trip in the G1 Belmont Derby, but he eventually finished second with a speed figure of 108.

Appleby is getting winners all over the place at the minute, and that form carries well to make Nations Pride the solid pick. Royal Patronage is another runner that I’m very keen on, while Ethereal Road could be a dark horse as he makes his first start on the turf.

The Glens Falls Stakes is the other graded race on the turf at Saratoga on Saturday, with this contest open to fillies and mares. There is no surprise to see War Like Goddess head the betting, as she was the winner of this race in very commanding fashion 12 months ago.

She hasn’t put a foot wrong since then either, and later claimed victory in the G1 Flower Bowl. War Like Goddess returned to the track in April with a stunning display in the G3 Bewitch, reaching a speed figure of 112. She’s extremely hard to look past this weekend.

Virginia Joy has some nice German form over this distance, as she finished second in a Grade 2. However, the value play here for me comes in the form of Key Biscayne. She finally looked at home last time out on the turf when winning the G3 Robert G. Dick Memorial, and more could be set to come on this step up. However, she is a place selection, as War Like Goddess is far too strong for this field.