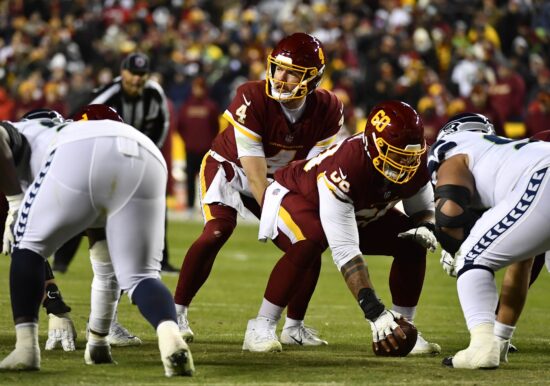 In Week 12, the Las Vegas Raiders put an end to their three-game losing streak by beating the Dallas Cowboys in Texas. AS a result, they’re now 6-5 on the season with a chance to challenge a playoff berth. To get one step closer to the postseason, they need to beat the Washington Football Team in Week 13.

They will have their fans to cheer them on at Allegiant Stadium. However, beating the WFT isn’t going to be easy as this team’s been playing top football in recent weeks. In fact, Washington is coming to Nevada after three straight wins.

Surging WFT Hoping to Upset the Odds Once Again

Washington is 5-6 in 2021, which means that their playoff dreams are still pretty much alive. Of course, to qualify for the postseason, they will need to record a few more wins before the end of the year. The good news for them is that their schedule doesn’t look too harsh.

In fact, there are a couple of winnable games coming their way in the remainder of the season. Is the WFT vs Raiders game in Week 13 one of them? Oddsmakers don’t think so, but they also didn’t think Washington was going to win its previous three games.

Each time in the past three weeks, the WFT were seen as underdogs. Against the Tampa Bay Buccaneers in Week 10, they were 10-point dogs before the game. That didn’t prevent them from beating the Super Bowl LV winners by 10 points.

A similar thing happened in Week 11 when we saw the WFT beating the favored Carolina Panthers. The same story happened again last Monday when they beat the Seattle Seahawks.

The Raiders started the season well but then a series of problems caused chaos in their locker room. The result was that they entered a losing series in October which lasted for three weeks. The good news for Vegas fans is that the disappointing run has officially ended – in Week 12, they won their first game since October.

The team they beat in the TNF game of Week 12 is Dallas, which was an eight-point favorite before the game. It wasn’t an easy win for Vegas – the game was decided in the overtime.

Thanks to that win, the Raiders are now 6-5. However, to get to the postseason, they need to continue winning. Their schedule isn’t easy, but the good news is that their best players have started improving. Their quarterback, for instance, Derek Carr threw no interceptions in Week 12, which was his first time since Week 7. We also saw him passing for 373 yards to his game, making his total 3,414 yards in 2021 – the best in the NFL.

Further, Washington was also great in rushing, scoring two touchdowns this way. One of those was scored by running back Josh Jacobs who now has six TDs to his name, the highest of all the Raiders’ players.

This is going to be a very close game, there’s no doubt about it. The Raiders are favored for a reason – they have better players than Washington.

Still, the WFT have been playing amazing football lately and no one should be surprised if they manage to prolong their series to four straight wins.