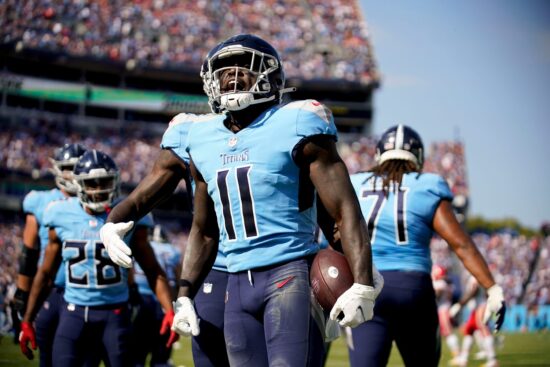 We are way past the half of the NFL season, and things are becoming very intense. The playoff battle is close to its peak, as well as the race for the top spot in each conference.

We don’t need to remind you that the No.1 seed allows the first-round bye in the playoffs, making it extremely valuable at that part of the season.

For the moment, the Tennessee Titans are topping the AFC Conference with eight wins and two losses. However, many wonder if they have the power to stay there because of Derrick Henry’s injury. King Henry has been one of the best running backs in the last decade, and his influence on the Titans’ game is enormous.

A very weak division favors Tennessee’s situation, with the teams like Jaguars and Texans involved. That’s why the bookies think Mike Vrabel’s unit has the best chances of ending as the No.1 at the end of the year.

The Buffalo Bills come second at +140. If it weren’t for an unexpected loss against the Jags, they would be in a much better position, but now, Josh Allen and the boys will need some luck. With 6-3 and a tie-breaker on Titans’ side, things will be rough for these guys.

Lamar Jackson and the Ravens are way behind, the same as the Kansas City Chiefs. Baltimore’s problem is inconsistency, the same as KC’s. Therefore +700 odds are perfectly reflecting the overall situation.

We have one heck of chaos in the NFC where at least four teams have the ambitions to take the top spot, plus the Buccaneers, who are still sleeping. The No.1 position is (for the moment) in Green Bay’s hands, who have the same record as the Arizona Cardinals but hold the tie-breaker.

Behind these two units are the Dallas Cowboys and the LA Rams. All these teams have one hell of a schedule and will face at least two of the other rivals in this race.

The Cowboys and the Packs have a bit easier division, but their other rivals are very tough. On the other hand, the Rams and the Cards are in the NFC West, arguably the most competitive group in the NFL, and they are ahead of one tough and nasty adventure.

Sunday’s game between the Packers and the Rams at Lambeau will significantly impact the entire race. If the Packs win, which is expected, having in mind the weather in Green Bay at this time of the year, Rodgers and his boys will have a huge advantage. But if they lose, everything is possible.

For the moment, we are leaning towards the Packs.