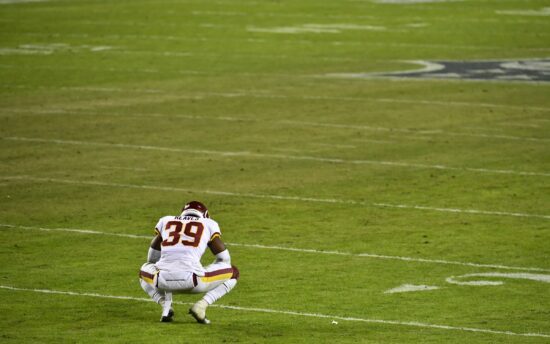 In this year’s NFL Draft, there are five franchise quarterbacks to be had in the 1st round (in no particular order):

If you believe the draft experts, there will be three quarterbacks gone amongst the first three picks in the draft. Those three are Lawrence to the Jaguars, Wilson to the Jets, and Fields/Lance/Jones to the 49ers. So, depending on how dire the need is under center, you may have to trade up if and snag whoever the 49ers do not draft. One of these franchises is the Washington Football Team.

To add context, since Dan Synder bought the franchise in 1999, 22 quarterbacks have taken the helm. Since 1999, WFT has just three seasons with 10 or wins. They have not had the luck the previous two times drafting a signal-caller in the 1st round.

In 2019, the franchise drafted Dwayne Haskins. Haskins played in 16 games and started 13 games, going 3-10 with 12 touchdowns and 14 interceptions.

Seven years prior in 2012, the franchise gave up three first-round picks and a second-round selection for the St. Louis Rams’ No. 2 overall selection for Robert Griffin III out of Baylor. Griffin III started just 35 games with a 14-21 record, leading them to the playoffs his rookie year.

He also was the AP Rookie of the Year that year. He was released in March 2016. Since then, quarterbacks like Case Keenum, Kirk Cousins, and Alex Smith have been the starting quarterback.

Despite going 7-9 last season, they won the NFC East for the first time since 2012. However, four quarterbacks to do it: Smith, Haskins, Heinicke, and Kyle Allen. Simply put, you need consistency and 7-9 will not do it year in and year out.

Given their draft position at #19, they might be hard-pressed to get one unless they trade up to do it but will they have cold feet after trading their future in 2012 for RG III? To me, they can get great value in the 2nd and 3rd rounds in guys like Kellen Mond of Texas A&M, Davis Mills of Stanford, or Kyle Trask of Florida.

They have the luxury of not having to throw one in immediately given Fitzpatrick being the likely starter. No matter what, they must find the long-term solution at quarterback in this draft. If not, it will be an uphill battle for the next decade or more.