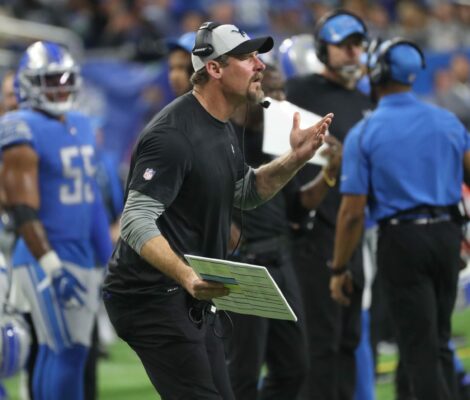 Losing every game (or almost every game) in an NFL season is quite a hard thing to do – you’ve got a roster of highly-paid professional athletes who hate losing, and usually, you can string at least one positive performance together or get some luck to force one victory.

That hasn’t happened so far for the Detroit Lions this season, but Dan Campbell’s team hasn’t obviously given up. If anything they’ve taken more risks than most teams to try and force a win, but the talent level is lacking, and their lead over Chicago on Thanksgiving always felt fragile and they gave up a late FG thanks to poor execution on the field and from the coaching staff.

It leads to the obvious question – Will they win a game this season? It might not feel like it for Lions fans, but the current odds show they are heavily favored to pull a win from somewhere.

The odds do show that Detroit are actually expected to get a win, so let’s have a look at where it could come from:

There’s no matchup that looks like Detroit are going to be listed as a favorite, so it looks like the odds are based on the percentages where almost every team manages to find a win from somewhere over an obvious matchup that they can target.

The Vikings are still in the playoff race and have a solid defense, and the same can be said of Denver. Arizona and Green Bay are in the hunt for the number 1 seed so that would be an almighty upset if they win there, so it’s probably going to come down to Seattle or Atlanta.

Usually, a trip to Seattle wouldn’t look promising for a team in this situation, but their season is pretty much over. There may be a chance that they’ve just given up by that point, perhaps Russell Wilson will be rested to allow him to recover for next season, but you wouldn’t associate Pete Carroll and his team with giving up.

The Falcons could also be done for the year at that point and their play has been up and down all season, so that looks like the game where the Lions are most likely to pick up a win.