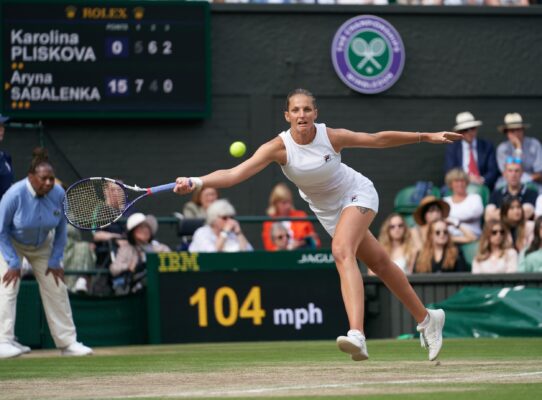 The ladies part of Wimbledon reached the final match. Two semis took place today, with Ashleigh Barty and Karolina Pliskova proceeding to the last contest of the championship.

One month ago, the Australian player had to withdraw from Roland Garros, being the biggest favorite to win the French Open. The No.1 in the WTA rankings won the title in Paris two years ago and was considered by many to have the best prospects to repeat that. Yet, a hip injury forced her to leave the French capital after two rounds.

Today, Barty looked better than ever, easily routing the former Wimbledon champion, Angelique Kerber, in straight sets, 6-3, 7-6. the German who won the tournament in 2018 managed to provide resistance in 86 minutes, but in the end, had to lay down the weapon before the rival.

Barty started the match very well, taking the break immediately and getting off to a 3-0 lead. Until the end of the first set, she didn’t have any problems controlling the tempo, routinely creating an advantage.

Kerber responded furiously in the second set, taking a break and 3-0 lead. It seemed that the match would see the third set as the German reached a 5-2 edge. But for some reason, Kerber slowed down, allowing Bary to come back and force a tie-break. In such circumstances, there was no way for Barty to lose. Boosted with a comeback and with momentum in her game, the top-ranked player in the world

This is her first title match in London and a chance to seal a second Grand Slam trophy after the 2019 Garros.

Pliskova Comes Back Against Sabalenka

The Czech player, who used to top the WTA standings a while ago, flipped the result against the rising star from Belarus, Aryna Sabalenka. Pliskova won 2-1, 5-7, 6-4, 6-4.

This will be the first Grand Slam finals for the Czech player who became only the fourth person from her country to reach the Wimbledon finals.

Pliskova constantly pressures her rival in the opening set, but she couldn’t make a breakpoint. In Sabalenka’s opening three games, Pliskova collected 8 breakpoint chances but couldn’t convert a single one. The punishment for that came in the final, 12th game of that sequence, once the Belarus player broke the opponent’s serve in the first opportunity that came along.

But that didn’t disrupt Pliskova, who kept on in the same manner, finally reaching that first breakpoint in the fifth game of the second set, getting that part of the match in her favor, 6-4.

The start of the third set saw Pliskova taking Sabalenka’s serve, and after that, calmly concluding the matchup. Even though Belarus tried to make some pushes, each attempt was unsuccessful.

Her clash against Barty on Saturday will be the eighth in head-to-head rivalry, with the Aussie leading 5-2 at this point.

The men’s semis are tomorrow – Berrettini vs. Auger-Aliassime and Djokovic vs. Shapovalov.