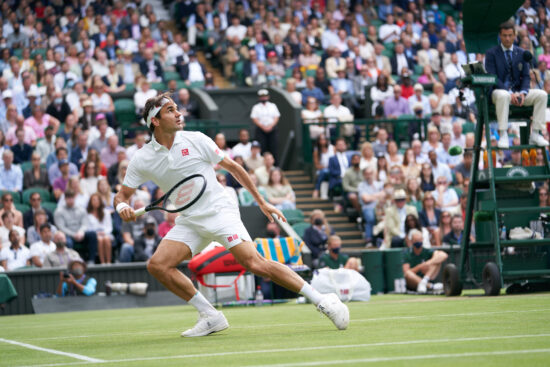 Roger Federer earned one of the most brutal defeats in his career, losing to Hubert Hurkacz today. It is the end of the road for the Swiss, who hoped to reach the finals and attack one more trophy.

Meanwhile, Novak Djokovic had no such problems, and the Serb smashed his rival in the quarterfinals.

The Swiss was demolished today against Hurkacz, who didn’t have any mercy towards the 20-time Grand Slam champion. He won in straight sets, 6-3, 7-6, and 6-0, which was the first time in 19 years to see Federer losing in straight sets at the All England Club.

What adds more pain to FedEx’s fans is the last set, in which the Pole humiliated one of the greatest players ever. This was something just a few expected to see, especially because Federer looked very well up until the stage of the tournament, beating the rivals fairly easy.

Hurkacz will meet with Matteo Berrettini from Italy, who had a tough clash with Felix Auger-Aliassime. The seventh-seed Berrettini won this match, 3-1, 6-3, 5-7, 7-5, 6-3.

The Italian indicated his rise early on this season, and was in the center of media attention at Roland Garros, once he wasted a 2-0 lead against Novak Djokovic. It seems that such a nasty defeat didn’t leave negative consequences on Berrettini but fueled the 25-year old.

Auger-Aliassime was competitive only in the second set, once he edged out Berrettini, but after that, didn’t have any chance of stopping the rival’s comeback.

Novak Without Problems, Faces Shapovalov Next

The Serb was solid against Marton Fucsovics 6-3, 6-4, 6-3. Despite what seems to be an easy win when looking at the result, this match lasted for 137 minutes, as the Hungarian didn’t want to go down that easy.

Still, Novak’s second serve was excellent, and the Serb won 82% of his points in those situations. His movement was also perfect, and the fans could see why the Joker’s prospects to win the title here, his third straight, are looking great. Without Roger in the campaign, they are even higher.

Overall, this was a good test for Djokovic before the semis, where he meets the young Canadian, Denis Shapovalov.

For all those who watched, this match might be one of the best since the start of 2021—drama, good plays, two tough players, all that was present in this contest.

The Canadian gave his best in this event, and many believe that he won’t have enough power to stand up to Novak. What is another reason why oddsmakers favor Djokovic heavily is the fact that the Serb won in all six previous head-to-head clashes.

The semi-finals are set for Friday.