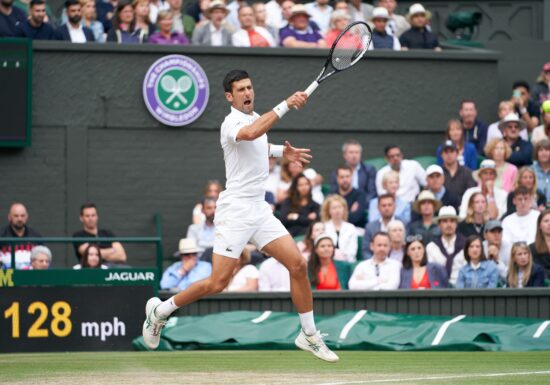 As expected, Novak Djokovic got into the Wimbledon finals without any particular trouble and is now after his 20th Grand Slam title. The Serbian was very confident against his rival, Denis Shapovalov, indicating that he comes into the finals at full speed.

As for Matteo Berrettini, he had slight trouble against the Pole who eliminated Roger Federer two days ago, but overall, he also fully deserved the win.

Djokovic is seen as the overwhelming favorite at -500, so Bettettini will need to produce a big upset to win the trophy and that’s reflected in his price of +400.

The young Canadian looked very confident in the opening set, earning one breakpoint and even serving for the set. But in the crucial moments of that game, the youngster couldn’t do anything against Novak. It was eventually 3-0 for the Serb, 7-6, 7-5, 7-5.

When we say that Novak schooled Shapo, we want to say that world no.1 showed the Canadian how to play in critical moments. Djokovic was flawless on each turning point, getting the edge in all the essential situations.

Even though the result looks a bit tight and as if he had a lot of trouble today, the situation, in reality, wasn’t that tense. Shapovalov had break chances in the second set, but he couldn’t use a single one, showing that he still has to learn and perfect his mental skills before surpassing arguably the most dominant player ever.

Novak, on the other hand, had no troubles when he had to break Shapo’s serve. This was his 78th win at the All England Club and 316th at all Grand Slam tournaments.

The finals on Saturday will be his 30th, and the Joker will have a chance to tie himself with Rafael Nadal and Roger Federer atop the all-time list. He is also competing for the sixth Wimbledon title, which would be a massive success for the guy who was once considered to be much weaker on the grass than on all other surfaces.

The Italian was better than the Pole in four sets, 6-3, 6-0, 6-7, 6-4. He was much better than the rival throughout the match, having superb first serve that made the biggest difference, making 22 aces with just one double fault.

Berrettini won the opening two sets in less than an hour of play, and it appeared that he might sweep the man who eliminated Roger Federer in the quarterfinals. Yet in the third set, Hubert Hurkacz started playing better, forcing a tie break in that sequence and getting the set in his favor.

That was a signal for the Italian to pull himself together and to finish the started job, which he did in the fourth set, without any particular problem.

When looking at the statistics, Berrettini was better in almost every essential aspect of play – 60-27 in winners, 22-5 in aces, and he also had fewer unforced errors, 18-26.

He and Novak Djokovic met at Roland Garros this year. Berrettini had a 2-0 lead but managed to allow Djokovic to come back and level the score before retiring during the fifth set.