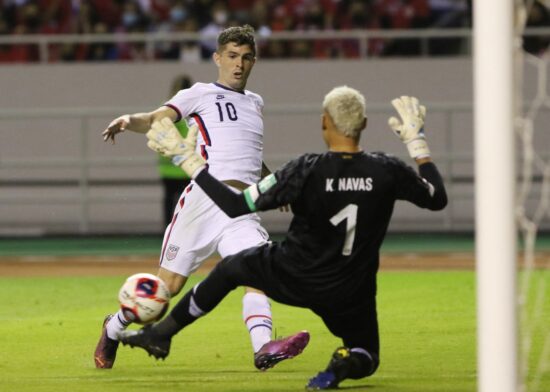 The excitement levels are building ahead of the start of the 2022 World Cup. The USMNT will be optimistic heading into the competition after being drawn alongside England, Iran, and Wales. BetOnline offers many interesting USMNT World Cup odds for the competition, and you can find the markets and our picks right here.

The USMNT will be looking to navigate their group and reach the knockout stages for the third time in four attempts World Cup this winter. The nation has successfully managed to make it out of the group on six occasions from the ten occasions that they have qualified, with their best showing coming when reaching the semi-finals in 1930. However, confidence may be lowered by the fact that the U.S. didn’t even manage to qualify for the competition four years ago.

On paper, the U.S. is in direct competition with Wales and Iran for the second spot in the group, as England is heavily expected to top the group comfortably.

The USMNT should have enough to see off the challenge from Iran on matchday three, which means the huge showdown on matchday two against Wales could be crucial. America is unbeaten in two previous fixtures against Wales, and we could see them getting three points from that game. A win against Iran is also expected, but a loss could be suffered against England.

If the USMNT are to pick up six points, then we see them finishing second in Group B, behind England. That could mean a potential showdown against the Netherlands in the Round of 16. In truth, that could be too big of an ask against one of Europe’s elite, and we would be surprised to see them come through that challenge. But, if they do, then a showdown with Argentina may await. At the very best, the U.S. could reach the quarterfinals.

USMNT To Qualify From The Group

The betting currently has the U.S. as the second favorite to qualify for the knockout stage from Group B. As we have mentioned throughout, we expect them to be battling with Wales for the second spot, but we would expect them to come through that challenge.

Sharing the goals was something that the U.S. really struggled with in qualifying, as Christian Pulisic was the only player to score five or more goals. However, we would be prepared to take a chance on Jesus Ferreira being the U.S. top scorer at the World Cup. The 21-year-old has scored five goals in eight games this calendar year, which included four goals against Grenada in the Nations League in June.

Red cards were in short supply at the 2018 World Cup, as the four dismissals were the fewest since 1978. For that reason, we struggle to see the U.S. picking up a red card in Qatar later this year.

Will The USA Win At Least 1 Game Odds & Pick