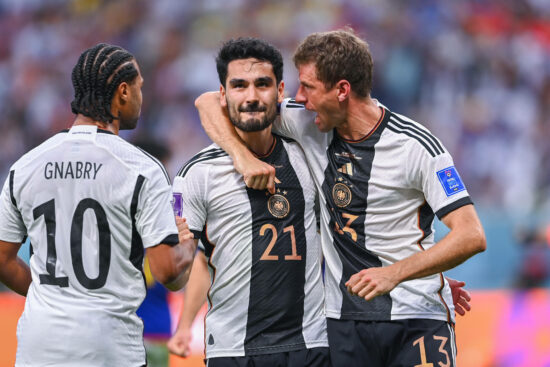 If you’re in search of some World Cup predictions, look no further, because, in this article, Vegas Odds are going to preview Spain vs Germany.

Spain vs Germany is probably the most exciting matchup of Round 2 of the 2022 World Cup. Luis Enrique’s team is off to a flying start, beating Costa Rica 7-0 in the opening round. It’s just the opposite when it comes to Hansi Flick’s boys – they lost to +800 underdogs Japan 2-1.

Losing another game would probably mean that Die Mannschaft would have to pack their bags. That’s why it’s almost 100% certain Germany will go all-in in this game. Will it pay off? Keep reading to see what we think.

The Red Fury made history in the opening round of the Qatar World Cup. They dismantled Costa Rica, beating them 7-0 – Spain’s biggest victory at World Cup Finals.

Luis Enrique’s absolutely dominated the game, keeping the ball in their possession 82% of the time. Do you know who else had the ball possession on their side? Germany. Hansi Flick’s team had 74% possession in the game against Japan but still ended up losing 2-1.

They created 25 goal attempts that day (eight more than Spain against Costa Rica), but only one went in. Knowing this, it’s clear that their Achilles’ heel was their offense. Flick started Kai Havertz as the striker, a man who usually plays the attacking midfielder role in Chelsea. The coach subbed him off for Nicklas Fullkrug near the end of the game, but it didn’t pay off.

The Germans will have to do much better in the offense if they want to get anything from the game with Spain. Truth be told, we really don’t know how good Spain are at the back. They had no need for any defensive work against Costa Rica who had zero goal attempts on Wednesday.

With 10 goals to his name, Thomas Muller is the man with the most World Cup goals among active players. However, he hasn’t scored a single goal at the World Cup since 2014.

Actually, the last time he did it was during Germany’s 7-1 thrashing of Brazil in the semifinal. Eight times later, his nation needs him to end his drought.

This is a must-win for Germany. Otherwise, they’re (probably) out of the World Cup. They do have the quality in the midfield to dominate the game and create chances. Whether they have the quality to turn those chances into goals is up for debate.

Still, if Muller (or some other forward) shows up on Sunday, Die Mannschaft are going to get back on the right track.