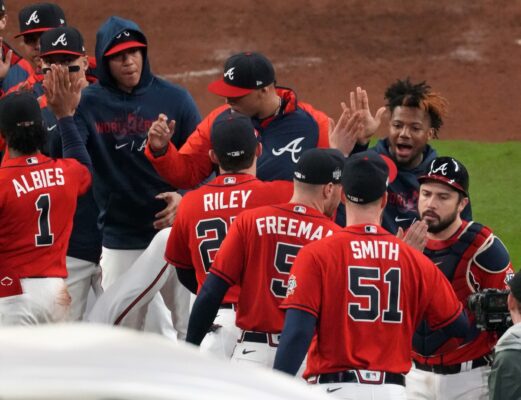 The Atlanta Braves came out of Houston with a tied series and brought the series back to Atlanta. The Braves, after their game three victory, are now 6-0 this postseason at Truist Park. The team that wins game three of the World Series has gone on to bring home the trophy 69% of the time. The Astros offense needs to come alive in game four, especially since the Braves have their first of two bullpen games.

The Houston Astros were shut out in game three of the World Series, against the Braves Ian Anderson and four relievers from the bullpen that the relief corp has rightly named “The Night Shift.” Game three was the first time that the Astros’ offense was shut out this entire postseason. Even though the Astros were able to draw a couple walks in the early innings, their first hit didn’t come until the top of the eighth inning when Aledmys Diaz hit a bloop single that fell in front of the Braves left fielder, Eddie Rosario. The only other hit in the game for the Astros was in the top of the ninth innings when Alex Bregman hit a single to right field.

For game four of the World Series, the Astros are handing the ball to their right-handed veteran, Zack Greinke. Greinke has pitched in only two games so far this postseason. In those two appearances, Greinke has posted a 7.71 ERA over just 2.1 innings pitched with one strikeout. Greinke hasn’t pitched since October 19 in Boston when he only pitched 1.1 innings, allowing two runs on one hit while walking three and not striking out any batters.

Due to the injury to the Atlanta Braves’ ace, Charlie Morton, the Braves are without one of their three starters that they have on the roster. Before we get into the Braves pitching situation, let’s take a look to see how they got to the 2-1 series lead. The Braves started the scoring early, in the bottom of the third to be exact, when Austin Riley hit a sharp ground ball down the third baseline, to score Eddie Rosario. No more scoring happened until the Braves tacked on an insurance run in the bottom of the eighth. With two outs and no one on base, Travis d’Arnaud came to the plate and crushed a solo home run to deep center field to give the Braves an insurance run that they truly didn’t need in this one.

Game four and the Braves are out of starting pitchers. Fortunately for the Braves, their bullpen has been spot on this postseason, but they will need to be spot-on for two entire games. In the only other game so far this postseason where the Braves needed to use a bullpen game, Jesse Chavez was their choice for their “starter.” Chavez has appeared in six games this postseason, with a 0.00 ERA over 4.2 innings pitched, with two strikeouts. In his last appearance, three days ago, Chavez only pitched 0.1 innings with no hits, runs, or strikeouts. Chavez would be my bet to “start” game four for the Atlanta Braves

The fans in Atlanta are going to be loud to start this game. Even though the Astros are sending a veteran right-hander to the mound in Greinke and he should be used to hostile environments, I still believe the Braves are going to get to the righty early in this one. Not only will it help them win game four, but put them in a good spot for game five if the Astros have to go to their bullpen early in this one. Look for the Braves to take the commanding 3-1 lead in the series tonight.