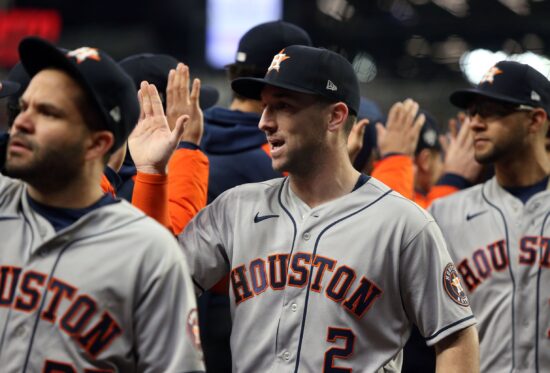 The Houston Astros, down four runs early in game five, rallied against the five Braves relievers to take game five in Atlanta to live to fight on another day. Now, after an off day, the Astors will host the Braves for game six and game seven, if necessary. The Braves are finally back to their starters instead of bullpen games, but will they be able to stop the Astros’ offense now that it’s gotten started?

The Atlanta Braves, after the injury to Charlie Morton, had to endure two straight games with their bullpen pitching all nine innings. The first game went their way, but not quite the same outcome in game two. Let’s look at what happened offensively in game five for the Braves. The offense started off hot when Adam Duvall hit a grand slam to deep right field, to give the Braves a 4-0 lead in the bottom of the first inning. By the time the Braves’ offense was able to strike again, it wasn’t until the bottom of the third inning, and the score was tied at four. Freddie Freeman hit a home run to center field, to give the Braves the narrow 5-4 lead. Unfortunately for the Braves and the fans in Atlanta, that was all the offense could push across in game five.

The Braves made the decision to give the ball to Max Fried in game six. Fried has pitched in four games so far this postseason, posting a 1-2 record with a 5.40 ERA over 21.2 innings pitched all while striking out 23 batters. Fried made his last appearance on October 27, again at Houston, where he pitched in five innings allowing six runs on seven hits while striking out six and walking one. Fried has to pitch better than the last time in Houston if he wants the Braves to come out victorious and not have to face a game seven in Houston.

Can Houston Live to Fight Another Day

The Houston Astros have to face elimination for only the second time this postseason, and the second straight game. They would love to make it three straight games and force a game seven, but they have to get through Max Fried again. Let’s take a look at what the Astros did in game five to force game six. Alex Bregman doubled sharply to center field, scoring Yuli Gurriel, in the top of the second inning, to cut the Braves lead to 4-1. Martin Maldonado hit a sacrifice fly to center field, scoring Kyle Tucker, to cut the Braves lead to 4-2. In the top of the third inning, Carlos Correa doubled to center scoring Jost Altuve, cutting the Braves lead to 4-3. Yuli Gurriel grounded out to the shortstop, allowing Michael Brantly to score, tying the game at four. After giving up a home run in the bottom of the third, the Astros tied the game again in the top of the fifth inning when Maldonado walked with the bases loaded, scoring Correa. Still with the bases loaded, Marwin Gonzalez singled to left field scoring Gurriel and Bregman, giving the Astros a 7-5 lead. In the top of the seventh inning, Maldonado singled again to left scoring Tucket to give the Astros an 8-5 lead. In the top of the eighth inning, the Astros finally finished their scoring when Carlos Correa singled to left, scoring Altuve to give the Astros their 9-5 lead.

For their win or go home game six start the Astros are giving the ball to their 24-year-old rookie, Luis Garcia. Garcia has appeared in four games this postseason, posting a 1-2 record with a 7.62 ERA over 13 innings with 18 strikeouts. Garcia last pitched four days again, on October 29, where he pitched in 3.2 innings allowing one run on three hits while striking out six and walking four. Garcia should be pretty well-rested, especially since he has only pitched in 13 innings this entire postseason. Just like in game five, if Garica gets in trouble early look for Houston to go to their bullpen as much as needed to force a game seven.

The two most exciting words in all of sports is “game seven” and I think that is what we are going to be looking at in this series. The Braves had a chance to end things at home, but instead, they allowed the Astros’ offense to come alive, something Houston really hasn’t done much in this World Series. I’m looking for the Astros to fatigue Max Fried then get to that Braves bullpen who has been overworked the past few games and come out victorious in game six, forcing a game seven.