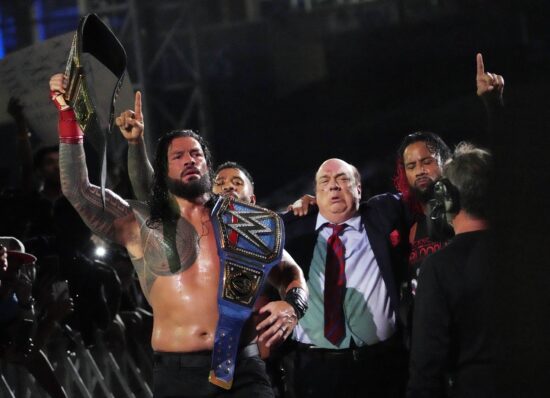 Wrestling fans can always tell that WrestleMania is getting closer, as the rumors focusing on potential money-spinning main events gather pace. However, one rumor that has been making headlines for several years now is a potential showdown between The Rock and his cousin, Roman Reigns.

Roman Reigns vs The Rock Schedule

Could The Match Actually Happen?

Plans for The Rock against Roman Reigns have been in the works for years, according to rumors online. Many fans even believed that The Great One would appear at Mania earlier this year, but that never materialized. But, after the record-breaking run that Reigns has enjoyed as world champion, there would be no better time than WrestleMania 39 to make the match happen finally. It could be argued that Reigns has been the biggest star in the company since The Rock’s departure. The match is something that has made headlines for many years.

Earlier this year, it made the headlines after scenes in Young Rock teased that Reigns wanted a match against his cousin in the future. However, plans for the bout have been stepped up this year, with respected wrestling journalist Dave Meltzer claiming that Rock/Reigns is ‘100%’ the plan with Mania in 2023 in mind.

Who Wins Rock vs Reigns?

The golden question is how the WWE comes to book the potentially money-spinning match between the two. One of the most likely scenarios will see Reigns drop the titles between now and WrestleMania in April, as a title match between the two would be fairly easy to predict the winner. The Rock could return at the Royal Rumble and cost Reigns in his title defense, which would immediately set up for the feud to reach its fitting end at the Showcase of the Immortals.

Rock will certainly need to shake off ring rust before stepping back into the ring, as he hasn’t competed in a full WWE match since WrestleMania 29 when he lost the WWE Championship against John Cena.

However, given that Rock has always looked to elevate emerging stars, it would seem difficult to believe that he would get the win over Reigns on the biggest stage. The only reason that he could get the win may be to set up a rematch at WrestleMania 30. However, we see this match as the final one of Rocky’s career, which means a Reigns win looks like the most likely outcome.