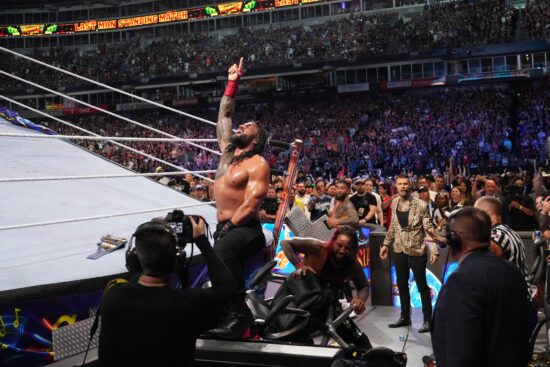 A day that many British WWE fans have been dreaming about for 20 years finally arrives on Saturday, September 3, as the WWE stage a major PPV in the country for the first time since 1992. WWE Clash at the Castle promises to be a huge night for fans, as the Undisputed WWE Universal Championship showdown between Drew McIntyre and Roman Reigns headlines the card.

WWE Clash At The Castle Schedule

Roman Reigns’ record run as WWE champion looks to be in danger this weekend, as he takes on hometown hero Drew McIntyre. Few superstars have done as much as the Scot to get a PPV in the United Kingdom, which means that it is no secret that he deserves his place at the top of the card.

Reigns recently ended his seven-year feud with Brock Lesnar with victory at SummerSlam, and he is quickly approaching 750 days as Universal champion. However, we could see the run coming to an end this Saturday. We could see McIntyre win the match, before Theory cashes in his Money in the Bank briefcase to become a monster heel.

Another hometown welcome will come as Sheamus challenges for the Intercontinental Championship against Gunther. The Irish-born superstar won a fatal-five-way match to earn the right to challenge for the championship, and it promises to be a hard-hitting affair.

Gunther is also likely to receive a good reception after competing in NXT UK before making his breakthrough on the main roster. The German-born star hasn’t held the title for long, which means that we could see him successfully retaining the title in Cardiff.

The SmackDown Women’s title is also on the line in Cardiff, as Liv Morgan looks to knock off another MMA star. Morgan won the title against Ronda Rousey, and successfully defended the title against the same opponent at SummerSlam last month.

Baszler’s career was given a lift as Triple H took over creative control, and many fans will be delighted to see her back in a meaningful match. However, we can’t see anything other than Morgan retaining the title in Cardiff this weekend.

Other WWE Clash At The Castle Predictions