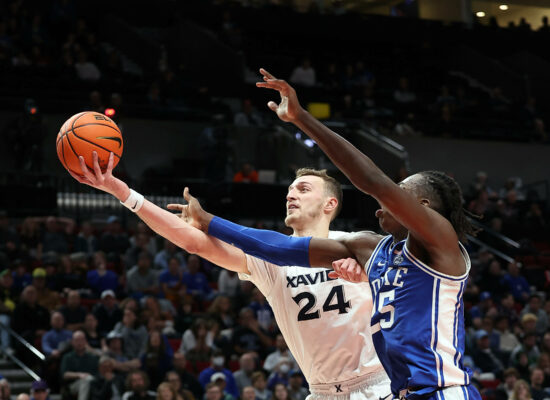 If you’re in search of the latest NCAAB betting odds and Xavier vs Connecticut prediction, look no further because Vegas Odds has you covered.

The Musketeers have now won 12 of the last 13 games, with the lone loss coming to DePaul by one point.

UConn was all the way up to No. 2 in the nation when Xavier defeated them on New Year’s Eve. That began a streak where UConn lost five of six games (including the Xavier loss) and they are fresh off a 30-point victory over Butler on Sunday.

UConn is still in the top 25, but a couple more losses will have them out of the rankings altogether after such a promising start.

Xavier has been one of the hottest teams in the nation since December, and they have won 12 of 13 games with wins coming against West Virginia, St. John’s, UConn, Creighton, and Marquette.

Zach Freemantle exploded in Xavier’s most recent game against Georgetown, scoring 30 points with 11 rebounds and seven assists in the victory.

Freemantle led the way last time they faced UConn, and he scored 16 points with 11 boards with Colby Jones chipping in 16 points and four starters finishing in double figures.

The last few weeks have not been kind for UConn, they have lost five of the last seven games and have dropped down the rankings quite a bit. On the flip side, Xavier is on a roll and has already topped the Huskies this season.

This game is in Connecticut, which helps UConn, but Zach Freemantle plays well once again, and Xavier escapes with a close victory.