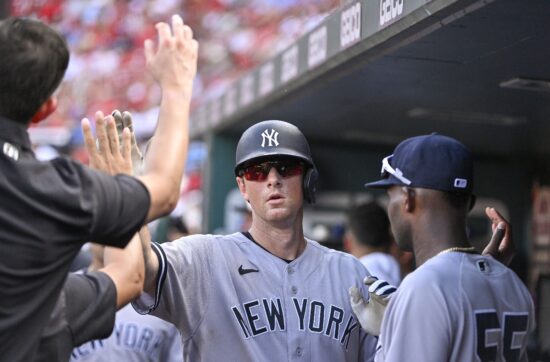 After a rough weekend getting swept in St. Louis things don’t get much easier for the Yankees as they head further West to face the Seattle Mariners. These two teams met up last week for a three game set at Yankee Stadium and it was the Mariners who came away with the series win taking two out of three.

Despite some struggles that have seen them post a 1-5 record so far in August, New York is still a -116 favorite in the Yankees vs Mariners matchup. Seattle has some value at -102 on the Vegas odds, although they’ve alternated wins and losses the last five games and are coming off a 6-3 win over the Angels that would have them in line for a defeat if the trend continues.

The Yankees five game losing streak has cut their lead in the AL East to 9.5 games, the first time in awhile it’s been in single digits. New York has a tough series in Seattle this week and then heads to Fenway Park for three rivalry games with the Red Sox. After that the Yankees return home for 9 games, but in tough series’ against the Rays, Blue Jays, and then Mets.

The series with St. Louis was a wild one for the Yankees, who lost 1-0 on Saturday and then were outgunned 12-9 on Sunday. New York had 16 hits in the series finale and Aaron Judge had a 4 RBI game, but it wasn’t enough to combat big days from Nolan Arenado and Paul DeJong who both had HRs and 4 RBI for the Cardinals.

Frankie Montas lasted just 3.0 IP in his New York debut, giving up 6 ER and requiring five relievers to get through the rest of the game. That puts some added pressure on Jameson Taillon (10-2, 3.96 ERA) in the Yankees vs Mariners matchup. Taillon faces Seattle for the second consecutive time, allowing 5ER (including 2 HR) in 4.2 IP as the M’s came out on top 8-6.

Sure a sweep would be nice but Seattle would likely take another series win like they picked up last week when these two teams met at Yankee Stadium. New York took home the opener 7-2, but the Mariners found their offense as they went on to 8-6 and 7-3 victories.

Houston has moved into a tie with the Yankees for most wins in the AL with 70, so Seattle still remains 11 GB in the West. The Mariners (59-51) are holding on to the third wild card spot, they’ve got the Guardians, Orioles, White Sox, and Red Sox all within five games so things are pretty bunched up.

Logan Gilbert (10-4, 3.09 ERA) starts for Seattle in a rematch of last Tuesday’s pitching matchup. Gilbert gave up 6 ER including 3HR to the Yankees in 5.1 IP but was bailed out by his offense in the 8-6 victory. Gilbert had held opponents to 2 ER or less in 4 of his previous 5 starts so he’ll try to get back into that form on Monday night.

These two teams accounted for 14 runs in last Tuesday’s game which features the same two pitchers on the mound. The Vegas odds still have the run total at just 7.5, which would seem like a solid ‘over’ play. The Yankees are struggling with five straight losses and the Mariners won the series on the road last week which would give Seattle the value too.