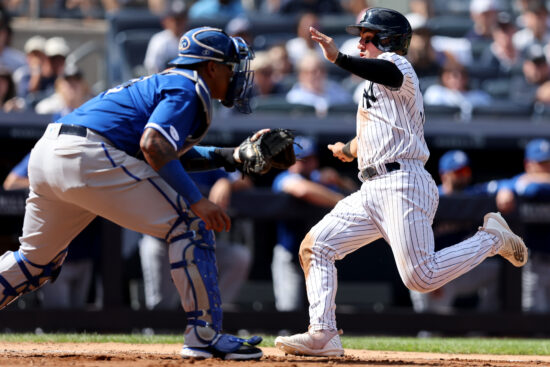 New York bounced back from a mediocre showing against the Mets with three straight wins against the struggling Royals.

Kansas City dropped to 29-62 as they’ve begun to sell off some assets in an attempt to rebuild their team for the future.

On the mound for the Yankees on Sunday will be starter Jordan Montgomery (3-3, 3.50 ERA). Montgomery has struggled a bit as of late. In his last 7 starts, he gave up 21 earned runs in 38 innings pitched, equivalent to a 4.97 ERA. New York will be hoping for Montgomery to get back on track after missing out on the Luis Castillo sweepstakes. On offense, the Yankees are led by MVP-candidate Aaron Judge, who leads all of Major League Baseball with 42 home runs and 91 RBIs.

The Royals have now lost 5 in a row and 9 of their last 12 games as they continue to slide further down towards the bottom of the AL standings. Kansas City dealt 28-year-old outfielder Andrew Benintendi to the Yankees on Thursday, as part of a deal to net them a few more prospects for their rebuild. Benintendi was having a career year with the Royals, hitting .320 on the season prior to the trade. His first series on the Yankees came against the Royals themselves. He went 1 for 8 (.125) at the plate in his first three games with New York.

The Royals have veteran pitcher Zack Greinke (3-6, 4.35 ERA) on the mound on Sunday. Greinke has had an up and down season so far. In his last 6 starts, the Royals went 4-2. In the four wins, Greinke gave up just 2 runs in 22 innings pitched, equal to a 0.82 ERA. Yet, in the 2 losses, he surrendered 9 earned runs in just 9 innings pitched, for a 9.00 ERA. The Royals will desperately need the superior Greinke to show up on Sunday against a loaded Yankees lineup to have any chance of avoiding the sweep.

This matchup clearly favors the Yankees, who have more than double the number of wins as the Royals. However, the pitching matchup is as beneficial to Kansas City as any matchup from these rotations could be, and 4-game sweeps are hard to pull off. I could see the Royals sneaking by with a close upset, but I’m nowhere near confident enough to bet on it. 9 times out of 10, the Yankees win this game, and that’s what I believe will ultimately happen.