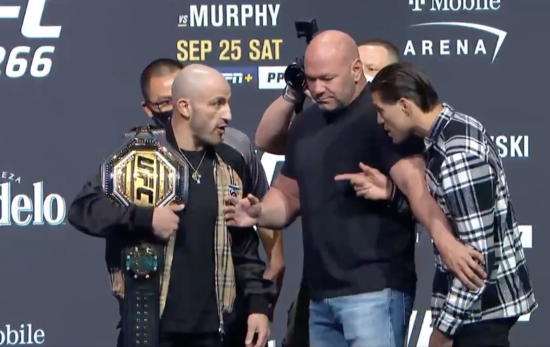 This one is going to be fun, ladies and gentlemen!

If you thought featherweights Alexander Volkanovski and Brian Ortega couldn’t dislike each other any more than already do – think again.

With the pair’s rivalry intensified while coaching on the most recent season of ‘The Ultimate Season’, it was always going to be a matter of time before the two men went toe-to-toe inside of the octagon – and that time is almost upon us.

UFC 266 will take place on Saturday night at the T-Mobile Arena with the event showcasing 13 bouts across the Early Prelims, Prelims, and Main Card.

Following flyweight champion Valentina Shevchenko taking on Lauren Murphy, all eyes will then turn to Volkanovski taking on Ortega for the right to be crowned the featherweight division’s king.

All this and we haven’t even mentioned the long-awaited return of fan-favorite Nick Diaz, who will be fighting Robbie Lawler in a rematch 17 years in the making.

Nevertheless though, ahead of UFC 266’s headliner, both Volkanovski and Ortega have squared off in what is arguably one of the most animosity-filled staredowns in recent history.

Clearly vocal throughout, champion Volkanovski (as quoted by BJPenn), was overheard trash-talking Ortega.

I ain’t scared of you. We are going in the cage anyway.

Mate, I didn’t know about you popping, that sh** don’t sit well with me, you don’t deserve to be here.