BetUS' facelift puts it shoulder to shoulder with the best. 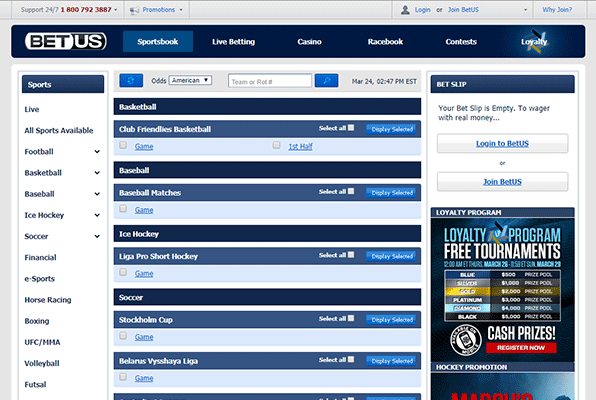 If you do a Google search on BetUS sportsbook, you will see that user reviews aren’t too favorable. This is kind of surprising because, at first look, BetUS looks like any other sportsbook operator. For this reason, I decided to do my own research and share the results with you.

Spoiler alert: BetUS is not a bad sportsbook. At least not anymore…

I’ll start my BetUS review with a little background info about the company, which should shed some light on why it has a bad rep.

The sportsbook has been online since 1994 according to the info I found on its website. Its first big break happened in the early 2000s when the popularity of online betting started increasing rapidly.

Unfortunately, the operator didn’t handle the increased betting volume very well. There are many reports from that period about BetUS delaying the payments to its customers or even paying them in installments.

The good news is that those days are long gone. At least, according to the data from the last couple of years. Some big changes have happened over the years. For instance, the company’s headquarters are no longer in Costa Rica. Instead, BetUS is now based in Cyprus.

The company that owns and operates the sportsbook is called Firepower Trading Ltd, which acquired a gambling license for BetUS in Curacao. Thanks to its license, the sportsbook has the luxury to accept players from various parts of the world.

One of the countries whose players can bet at BetUS is the United States. It would be strange if the sportsbook with such a name didn’t accept US players.

BetUS gives a sign-up bonus to its new players as a way of congratulating them on making the right choice. Every new player will receive at least a 50% bonus on their first deposit. I say “at least” because those who use cryptos to make their first deposit get a 100% bonus. The same deal applies for the second deposit as well.

In addition, there’s also a 10% Loyalty Bonus, as well as a 10% gambler insurance. How it works is that you will receive a 10% cashback on your gambling losses twice a year.

There’s also a loyalty program, which enables you to collect comp points that can be exchanged for bonus money. To get the points, all you got to do is bet. The more you bet, the more points will come your way.

I’m still not done talking about the promos you can get at BetUS. What’s really awesome about this sportsbook is that it organizes free contests on a regular basis. The contests are very creative in my opinion, although most of them are based around making as many correct predictions as possible.

Being interesting is not the main selling point of the BetUS contests. What I really like about them are their really big prizes. For some contests, the prize money comes with six or even seven figures.

Card and e-wallet deposits are processed instantly, while bank transfer and cryptos might take a while longer. For example, if you decide to use Bitcoin for this purpose, the funds should be in your BetUS account within half an hour.

Speaking of Bitcoin, withdrawals come with no fees and should be processed within a few hours from the moment you’ve made a payout request. The same might not apply to other methods. There’s no info about other withdrawal methods available on the website.

Considering that it’s focused on the US market, it’s not surprising that the BetUS betting offer is packed with sports popular in this part of the world. Football is their no. 1 focus, with events from all sorts of different competitions.

In addition to the NFL and the NCAAF, you can also bet on some less popular competitions, e.g. XFL, CFL, Arena, etc. It’s basically the same case with other spots loved by US bettors, including baseball, hockey, basketball, MMA, and so on.

Apart from the ginormous betting offer, there’s another thing I was impressed with – the selection of bets you can place. In addition to regular wagers like the moneyline and spreads, you can also bet on players’ performances, quarters/halves, etc. BetUS also has a section for live betting, while future bets are offered for some sports.

BetUS is obviously trying to rebrand itself as a user-friendly sportsbook. That’s why it’s not surprising that it has customer support that’s available around the clock. According to the website, they’re at our service 24/7, every day of the year.

The best thing about BetUS customer support is that we can get in contact with them by phone, calling their toll-free number which is 1 800 792 3887. Another way of getting in touch with them is by sending an email at [email protected]

There’s also a live chat feature on the site, which is surprisingly good in my opinion. My experience with live chat is that the agents usually take too long to reply (or don’t answer at all). However, that’s not the case with BetUS.

I got in touch with an agent within seconds from launching the live chat feature and my question was answered almost instantly. If you’re wondering what my question was, I asked them about the football betting offer. Turns out, this sportsbook offers pro football betting throughout the year, even when NFL and NCAA seasons are over.

Most user reviews I found online about BetUS aren’t very positive. Still, I do believe this sportsbook deserves another chance. Everything about BetUS seems alright, from its promos to its super-responsive customer support.

A: Players from the United States are welcome, but those based in Canada currently aren’t.

Q: Can you bet on horse races at BetUS?

A: Yes, you can. There’s a “Racebook” section on the site where you can place such bets.

Q: Is there an online casino that’s a part of this website?

A: Yes, there is. Click on the “Casino” tab and you’ll get to choose from hundreds of virtual casino games, including slots, video poker, roulette, and others.