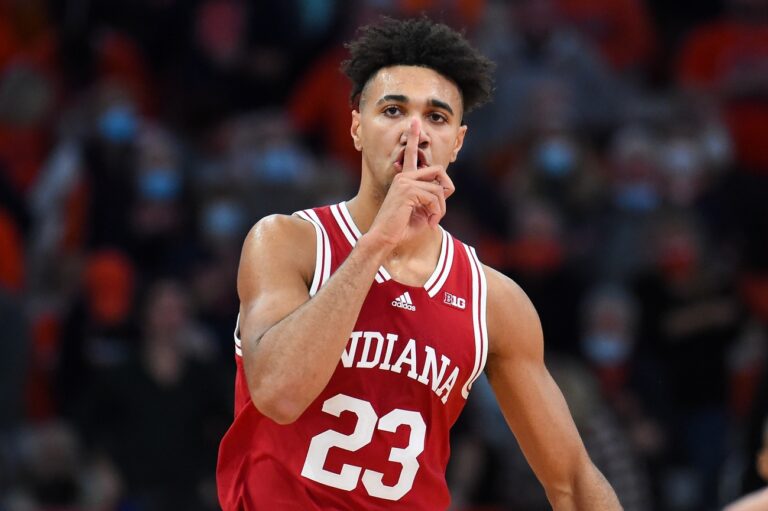 The play-in teams have been decided. Texas A&M Corpus Christi clashes with Texas Southern with an in-state showdown. The Indiana Hoosiers battle it out with the Wyoming Cowboys. March Madness 2022 is now in full swing with the first four matches along with the bracket is all set. We have four teams battling it out […] 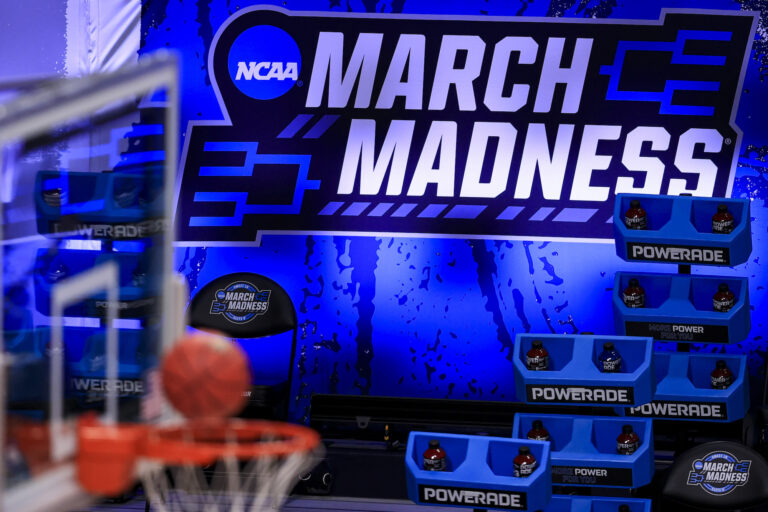 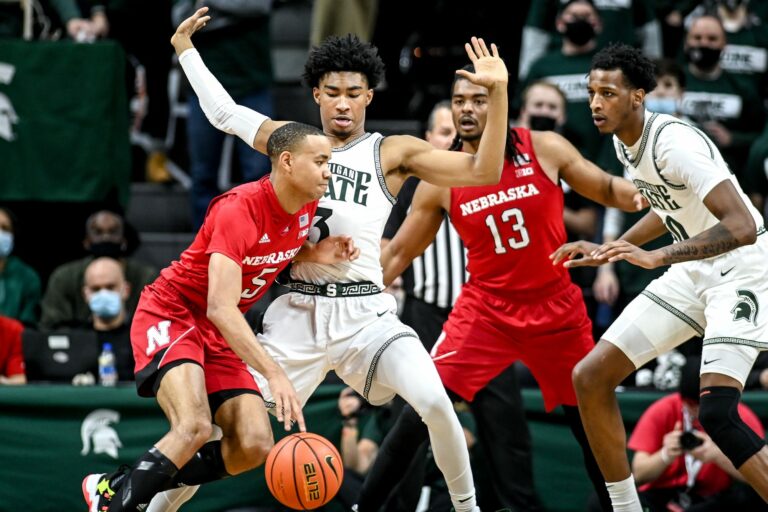 Michigan vs. Michigan State postponed Top-ranked teams in action this Saturday Seton Hall’s tough Saturday test The much-anticipated first game between the Michigan Wolverines and the tenth-ranked Michigan State Spartans was postponed early Saturday morning. Tuesday, the Michigan squad was already without four players against Rutgers. Teams in the Big-10 are required to play if […] 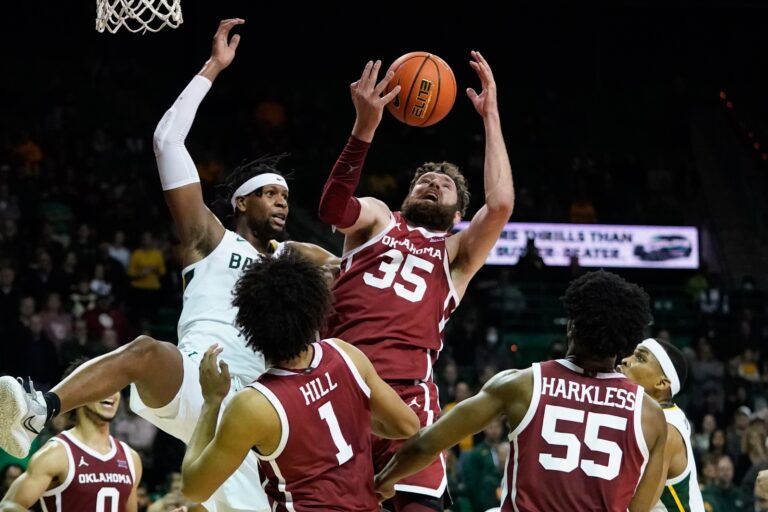 NCAA updates COVID-19 protocols Top-ranked teams hold their positions Ranked teams clash in two Saturday matchups The NCAA has updated its COVID-19 guidelines for winter sports on Thursday as the Medical Advisory Group aligned the guidance with the CDC’s recommendations that were announced last month. More than 150 games have been canceled in NCAA basketball […] 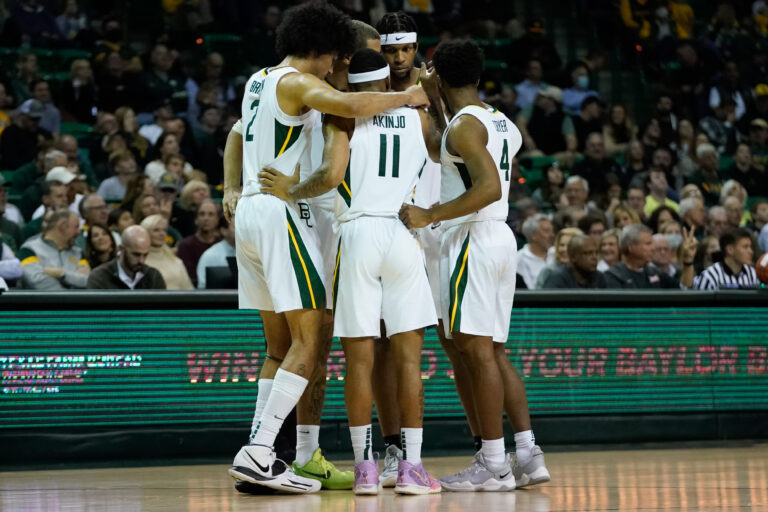 #11 Iowa State Takes solid win over #25 Texas Tech  #19 Villanova easily surpasses Creighton for their third conference win  College Basketball Coach of the Year Analysis amidst updates in the race for the NCAA championship title The Iowa State Cyclones had it mildly controlled during the first half of the game vs. the Texas […] 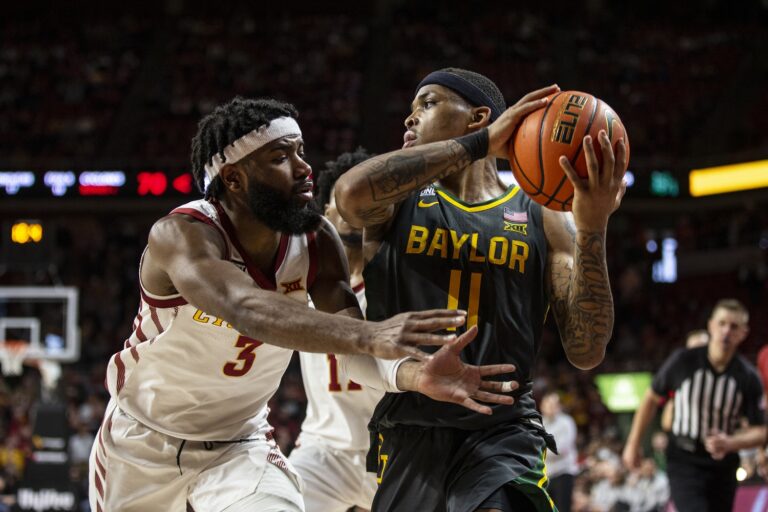 Auburn moves into the top ten Iowa State takes first season loss vs Baylor Purdue likely to fall in rankings after loss This week, the Baylor Bears remained at the top of the AP Top-25 rankings after a big win against #8 Iowa State on New Year’s Day. They will be in action on Tuesday […] 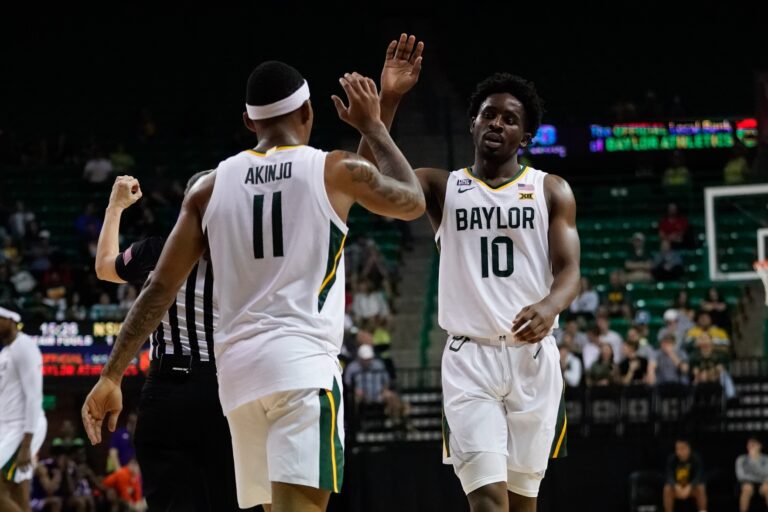 Baylor wins 18th straight in victory over Demons No. 14 Crimson Tide has solid win over the Volunteers AP Top 25 Poll puts Baylor #1 With 18 wins a row, a 12-0 season record, and overall leader of the Big 12, Baylor is far exceeding expectations. If anything was still up for discussion to question […] 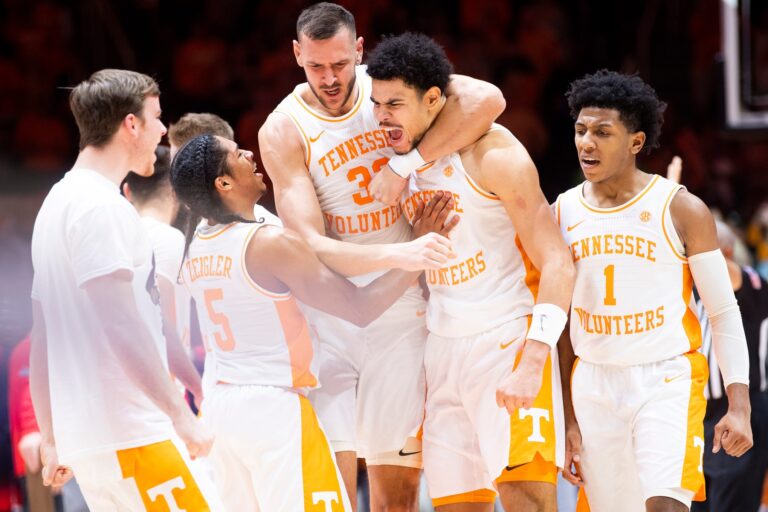 Baylor, Duke, and Purdue remain in the top 3 spots Teams fall in AP Top-25 rankings Many teams paused their action until after the new year The Baylor Bears remain number one for the third week in a row in the AP Top-25 rankings, as do the Duke Blue Devils at number two and the […] 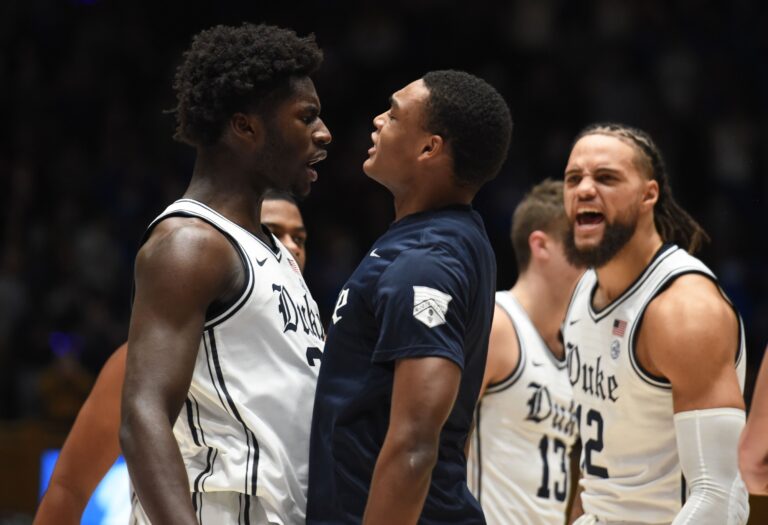 COVID-19 concerns continue as more games are postponed Several teams move up in rankings Top 3 remain unchanged The recent surge of the Omicron variant has had an enormous impact on major sports throughout the country, and college basketball is no exception. Many teams have had to postpone or even forfeit games. Some teams have […] 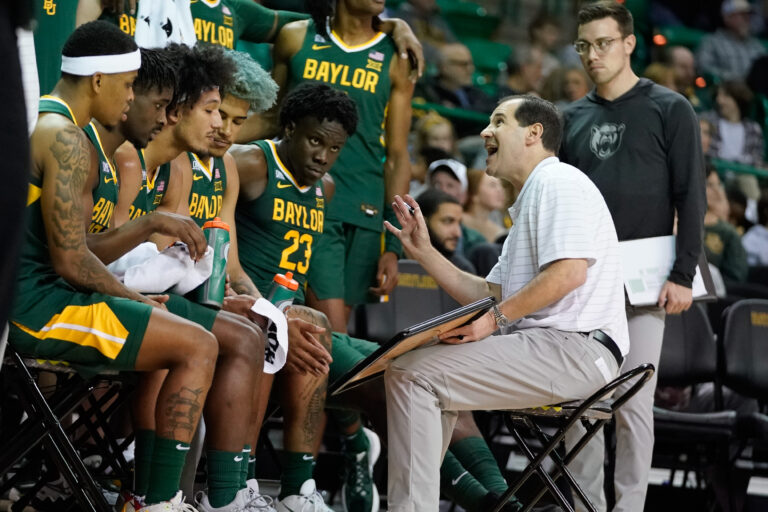 Games are being canceled or forfeited due to COVID-19 concerns Baylor, Duke, and Purdue keep their top rankings NC State program placed on probation The NCAA is trying to deal with another COVID-19 outbreak around college basketball as conferences are busy shuffling schedules due to virus issues. Most recently, Georgetown had to forfeit last Wednesday’s […] 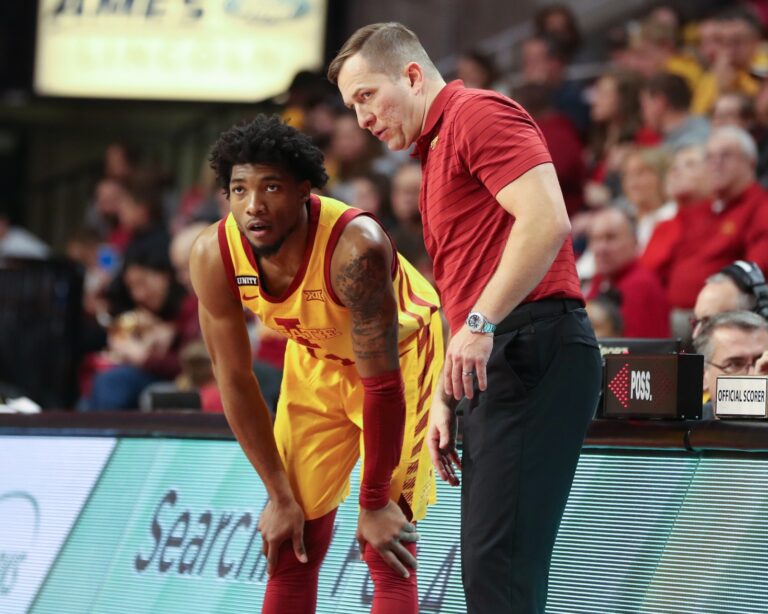 Seven Division I teams still undefeated Villanova tumbles in the rankings Kentucky-Louisville game postponed At this point in the NCAA basketball season, with conference schedules just heating up, there are still seven undefeated teams. USC holds the best record in the country at 12-0 and is currently ranked 12th in the AP Top 25 and […] 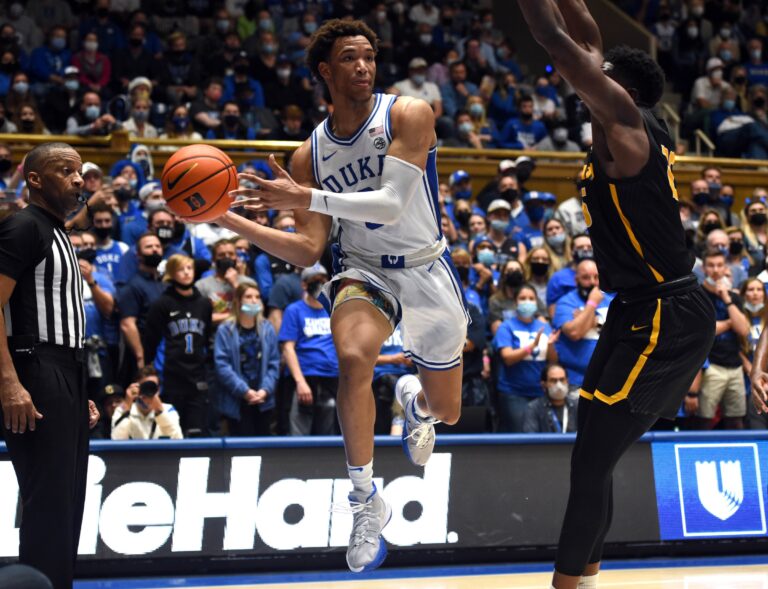 Boilermakers turning up the heat Kansas’ Agbaji Tops NCAA POY Rankings Blue Devils see the finish line This Saturday night is set to feature some top NCAA basketball games as the teams aim to climb the standings and push for the championship title. Among some of the top games for Saturday is the duel between […]

What is NCAA Basketball?

How Long Is a College Basketball Game?

NCAA basketball games are 40 minutes in length as long as there is a winner at the end of that time period. An overtime period is five additional minutes as needed, and the game will be played out until a winner is determined.

How Long Is College Basketball ‘Halftime’?

Most regular-season college basketball games include a halftime period of 15 minutes. For the NCAA Tournament games, there is a 20-minute halftime period.

How Many Quarters Are in College Basketball?

How Many Periods Are in College Basketball?

There are no periods in college basketball as the game is broken down into either four quarters (women) or two halves (men).

When Is the NCAA Basketball Tournament?

The NCAA Basketball Tournament is held each year beginning in the third week of March and ending the first weekend of April. The dates change every year, but the tournament always begins on a Tuesday night with the “First Four” games.

Selection Sunday precedes the tournament, and this is one of the biggest days of the calendar year for sports fans.

Who Won the NCAA Basketball Championship in 2019?

The Virginia Cavaliers won the 2019 NCAA Basketball Championship by defeating the Texas Tech Red Raiders. Here is a list of the last five NCAA basketball champions prior to 2019:

When Does College Basketball Start?

NCAA basketball season officially starts in the middle of October as practices can begin. The first official games can be played at the beginning of November, with that date changing slightly each year.

Most Division I conferences don’t start league play until after the first of the year, but some will have some conference games in December. Conference tournaments are then held the first or second week of March so that all are wrapped up by Selection Sunday.

Most college basketball teams will play close to 30 games during a regular season. Conference tournaments can range anywhere from one to five games for each team.

How Many Games Are in the NCAA Basketball Season?

The number of games for each NCAA Basketball team varies, but the average is typically right around 30 games per year. UConn and Michigan hold the record for most games played with 41 total games.

Who Has the Most NCAA Basketball Championships?

The UCLA Bruins have won 11 NCAA Basketball Championships, which is the most all-time. Their last championship came in 1995, but they won seven straight championships from 1967-1973.

Here is a look at the other teams in the top five:

What Are the NCAA Basketball Rankings?

There are two main college basketball rankings that can be found weekly. The first is the Associated Press poll, and the second is the coaches poll.

Writers vote in the AP poll, and that is typically the one that is used by sites when displaying rankings. All Division I coaches can participate in the coaches poll, but it is not a requirement.

Bettors tend to look at the AP Poll rankings when trying to determine the top team in each matchup. These rankings do change weekly during the season, but they tend to become a better representation of the top teams near the end of the season.

When Do NCAA Basketball Rankings Come Out?

The NCAA Basketball rankings are released every Monday after all of the votes have been collected. The Top 25 is revealed along with any other team that receives votes.

When Are NCAA Basketball Rankings Updated?

The NCAA basketball rankings are updated each week, and there tends to be quite a bit of movement within the Top 25. One loss can really affect a team’s rankings, and new teams can jump into the Top 25 with a major win.

Once the NCAA Selection Committee releases the tournament field, those seeds are locked in place. That will help bettors get a better understanding of where teams stand for the entire duration of the tournament.

How Many NCAA Basketball Teams Are There?

There are currently 1,036 NCAA Basketball teams that compete across the three levels of competition. These teams can move across the different levels, but there is a process for this to happen.

For televised college basketball games, there will also be media timeouts in play. These timeouts are agreed upon before the game and are usually done at the first stoppage of play after the 16-, 12-, eight-, and four-minute marks.

Timeouts can only be called when a team is in possession of the ball, or they can be called during a dead-ball situation.

Typically, some sort of education or sports management degree is required to get into the coaching profession.

How Much Do College Basketball Coaches Make?

How Much Do College Basketball Refs Make?

Most college basketball refs are full-time employees with a median salary of close to $36,000. This number can change depending on what league and at what level the referees are working at.

What Channel is College Basketball On?

Viewers can see what NCAA basketball games are on today on a number of different channels, including ESPN, FoxSports1, FOX, CBS, ABC, and NBC. The NCAA Tournament is on CBS, TNT, TBS, and TruTV.

How To Get Recruited for College Basketball

High school coaches can also send out highlight tapes or game footage to college coaches to get a player’s name out there. Recruiting can begin as early as junior high age but ramps up during your junior and senior years of high school. So if you want to know how to get recruited for college basketball, train hard and start recording your game footage to be compiled and sent out!

If you’re hungry for some more advanced reading, head over to to the NCAA basketball odds page to find out who plays college basketball tonight

Who is number one in college basketball?

The debate of “who is the best team in college basketball?” has been going on forever, but Kentucky, Kansas, North Carolina, and Duke are considered the “blue-bloods” of college basketball, and these are the four winningest programs of all time.

When does college basketball season start?

NCAA basketball season practices usually begin in the middle of October, with games typically starting at the beginning of November.

How long is a college basketball court?

A college basketball court is 94 feet long and 50 feet wide.

How many minutes are in a college basketball game?

There are 40 minutes in a regulation college basketball game. That is the same for both men’s and women’s basketball.

How many players are on a college basketball team?

There are 13 Division I scholarships available for each college basketball team, but each team can carry walk-on players. Most teams will have 15 to 16 players on the roster each season.

The 2020 NCAA Men’s Basketball Tournament was canceled due to COVID-19, so there was no champion crowned. The year prior to that saw Virginia Cavaliers take the Championship.

Who won NCAA Basketball Championship in 2019?

The Villanova Wildcats defeated the Michigan Wolverines to win the NCAA Tournament in 2018.

Who won the 2016 NCAA Basketball Championship?

In 2016, the Villanova Wildcats defeated the North Carolina Tar Heels to win the NCAA Tournament on a buzzer-beating three-point shot.

How much do college basketball referees make?

The median salary of NCAA basketball referees is a little more than $36,000.

How much do college basketball players make?

NCAA Basketball players are on a full or partial athletic scholarship, but they are unable to receive any pay for playing.

When does the NCAA Men’s Basketball Tournament start?

The NCAA Men’s Basketball Tournament starts the third week of March and concludes the first weekend of April.

How long is a ‘half’ in college basketball?

Each half in a men’s college basketball game is 20 minutes long.

How many fouls in college basketball are allowed?

Each player is allowed five fouls before they are disqualified from a college basketball game.

How many NCAA Division I basketball teams are there?

How many timeouts in college basketball are there?

Each team is allowed four “full” timeouts, and two “30-second” timeouts; one of which is only available for the first half and does not carry over.

Do college basketball players get paid?

NCAA basketball players are not paid in money; they are compensated with partial or full athletic scholarship.

When do NCAA basketball rankings update?

NCAA basketball rankings are updated once a week throughout the season.