Pregame festivities will begin well before 6:30pm ET, but the league does its best to start the game close to the announced kickoff time.

The length of the National Anthem and other pregame ceremonies could force the game to be delayed, but it won’t be more than a few minutes off.

Sportsbooks to bet on the Super Bowl with a deposit bonus:

Super Bowl LVI will take place on Sunday, February 13 at 6:30 PM ET and will be contested between the Los Angeles Rams and Cincinnati Bengals. Initially, it looked like the story with the Bengals would be simply breaking their streak of over 30 years without a playoff victory, but they went on to upset the Titans and Chiefs to make it here.

The game will be held in the Rams’ home stadium of SoFi Stadium so there’s a potential home advantage for Sean McVay’s team. They’ve gone all-in on a Championship this season after trading significant Draft capital for Von Miller and Matthew Stafford so there is an all-or-nothing feel about this season in many ways.

We will see some kind of history being made in this game with the Bengals either winning their first-ever Lombardi Trophy or a first for the Rams since relocating to L.A.

The Bengals defense is no joke after restricting Patrick Mahomes and the Chiefs to just a FG in the second half and overtime in the AFC Championship game, but the strength of this team is certainly the offense.

Joe Mixon is one of the best RB’s in the league and that threat has to be respected, but Joe Burrow has torched teams in the passing games this season after the addition of rookie Ja’Marr Chase. The supporting cast of Tyler Boyd, Tee Higgins, and C.J Uzomah can also feast when left with one-on-one coverage, so they’ll be expecting to put up points in this game.

Their kicker Evan McPherson has also come up clutch several times this season and is 12/12 for FG attempts in the postseason so far, so he could also be influential to the outcome of this one.

The Rams are the obvious favorites coming into the Super Bowl – They have a home advantage, they are perceived to be the stronger team and their playmakers on either side of the ball have a bigger chance to make a difference.

One of Cincy’s bigger weaknesses in their O-Line, and the Rams have Aaron Donald and Von Miller to cause chaos by getting pressure on the QB. Joe Burrow took 9 sacks against Vegas in the Wildcard round but also looked like Houdini at times against the Chiefs, but if the Rams can go ahead early and get after him then that could be the key to victory.

The spread in this game opened at 4 points, and that does feel about right for this matchup. It won’t be a surprise if the Rams go ahead early as the Bengals have taken some time to grow into games, but they also have the ability to come back and keep things close.

We can also see some early nerves from Joe Burrow and Matt Stafford resulting in the defenses being on top for the first quarter or two and the over/under being set at 48.5 points suggests that the under would be our preference on this.

Ultimately we do like the Rams to ultimately emerge victoriously, but it will be close and likely decided on the final possession of the game.

The Super Bowl is the biggest sporting event in the United States each year, and arguably the biggest in the world. This game features the top two NFL teams each season, but there is much more to it than just a football game.

Betting on the Super Bowl is also an experience of its own, and it’s annually a huge day for sportsbooks around the world when it comes to Super Bowl odds. The Super Bowl attracts both football fans making NFL predictions and non-football fans and the entire country is glued to their TV sets.

Super Bowl LVI will be held at SoFi Stadium in Inglewood California on Sunday, February 13 at 6:30 PM ET.

The AFC and NFC champions will meet up for the right to hoist the Lombardi Trophy as the Super Bowl champion, with this year seeing the Cincinnati Bengals taking on the Los Angeles Rams

When is the Super Bowl?

The Super Bowl will be held on February 13, 2022, which is the date that was set by the league prior to the season.

Since 2004 the Super Bowl has been played on the first Sunday in February. There is exactly two weeks between the conference championship games and the Super Bowl.

Tom Brady’s decision to leave the New England Patriots was justified as he led the Tampa Bay Buccaneers to victory over the Kansas City Chiefs 31-9.

Brady and Gronk took the headlines for their offensive play which led to the victory, but the real key to victory was the D-Line which terrorized Patrick Mahomes and eventually led to the Chiefs overhauling their entire O-Line as a result.

After Covid affected the attendance in Super Bowl LV, it’s expected that over 70,000 fans will attend the game this year and tickets are expensive as you might expect.

CNN have reported that tickets for this game are the most expensive ever, with fans currently paying over $10,000 to obtain tickets at this late stage.

The game will be broadcast on NBC, but it’s available on multiple different streaming sources around the world.

The announcers will be Al Michaels and Chris Collinsworth who are the usual NBC team for NFL games.

The Super Bowl halftime show lasts between 20 to 30 minutes each year, which is twice as long as it normally is during the regular season. This can have a major impact on games as teams must try to stay loose during this period.

Halftime of the Super Bowl also produces some of the most memorable television commercials and companies pay a large amount of money for these advertisement slots. A large production crew works quickly to set up a stage in the middle of the field, and a large contingent of fans are allowed on the field for the halftime performance.

The halftime show this year could be one of the biggest ever, with multiple artists lined up to perform in the extended show including Dr. Dre, Eminem, Mary J. Blige, Kendrick Lamar and Snoop Dogg with some “surprises”.

History of the Super Bowl

The first Super Bowl was played on January 15, 1967, but it did not use the Super Bowl name at that time. AFL–NFL World Championship Game was the first official name until the two leagues merged in 1970 and started Super Bowl history with the namesake it goes by today.

Traditionally, the game was played in January, but it has been played on the first Sunday in February since the 2004 season. Instead of a year, Roman Numerals are used to identify the Super Bowl each year, except for Super Bowl 50.

The Green Bay Packers won the first two Super Bowls ever played, led by legendary coach Vince Lombardi. Following his death, the annual trophy was named the Lombardi Trophy and was first given out at Super Bowl V.

The location of the Super Bowl changes every year, but it has been played in the Miami area more than ten times.

There have been 20 different NFL franchises that have won a Super Bowl, and eight other franchises have made an appearance. The Cleveland Browns, Detroit Lions, Jacksonville Jaguars and Houston Texans are the only teams to never appear in the Super Bowl.

The New England Patriots and Pittsburgh Steelers have both won six Super Bowl championships, which is a tie for the most all-time. New England also leads the NFL with 11 Super Bowl appearances.

There are seven different franchises that have won back-to-back Super Bowls, and the Steelers have accomplished this feat twice.

What time is the Super Bowl?

What channel is Super Bowl on?

NBC will be streaming Super Bowl LVI this year to US viewers.

Who’s in the Super Bowl?

How much are Super Bowl tickets?

Super Bowl Tickets are currently going for over $10,000 in some places

Early odds for the Super Bowl LVII champions have been released already.For the moment, the Buffalo Bills are the No.1 favorite to win SB. The Houston Texans sit at the bottom of the list, far behind all other rivals.  Even though we aren’t anywhere near the new NFL season, the recent NFL draft and the free […] 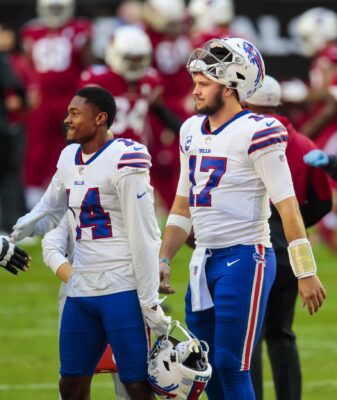 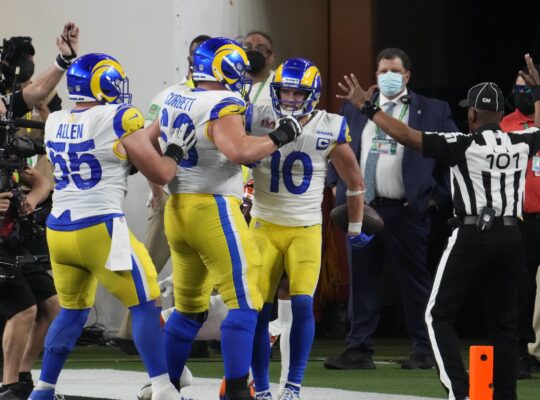 Triple Crown winner adds another trophy Kupp and Stafford took over down the stretch There’s not much more that Cooper Kupp could have done to make his 2021/22 campaign more special after leading the NFL in receptions (145), yards (1947) and TDs (16) but he found a way by also winning the Super Bowl LVI […]

Los Angeles sealed the deal with a 1-yard Cooper Kupp TD pass under 1:30 Bengals still cover the +4.5 Cris Collinsworth remarked early in the Super Bowl LVI broadcast about a non-call pass interference on Jalen Ramsey that “this is the Super Bowl, you let the players decide.” That mantra didn’t hold true with under […]

Zac Taylor opening up the playbook a bit with halfback pass Bengals back to covering the +4.5 Just when you thought the Rams were going to run away with Super Bowl LVI building up a 13-3 lead, the Bengals responded with a 12 play, 75 yard drive that kept the Los Angeles offense off the […] 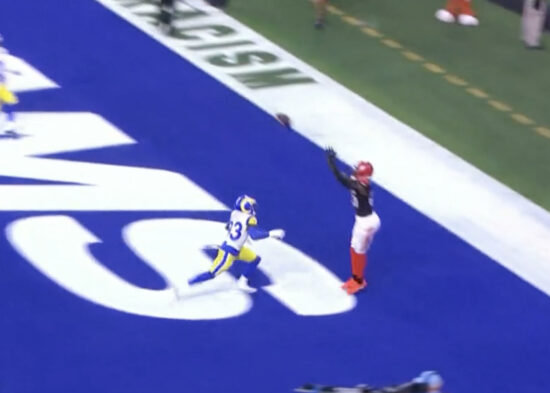 Sportsbooks had to have taken a bath with one of the most popular players in the NFL being the one to score the first TD of Super Bowl LVI. Matthew Stafford found Odell Beckham, Jr. for a 17-yard TD catch on the Rams’ second drive of the game to give the Rams an early 7-0 […] 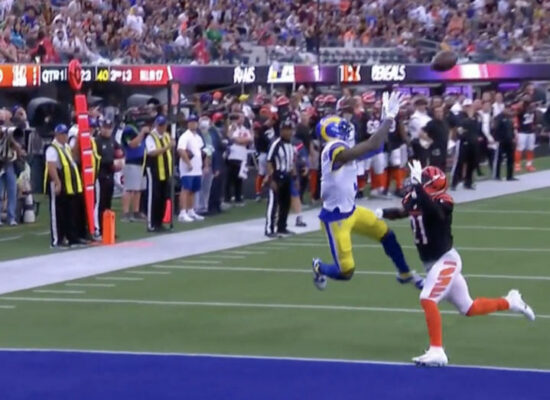 Singer clocks in at 1:51 Over prop was just 1:42 Country singer Mickey Guyton just wrapped up an amazing rendition of the national anthem as the kick off to Super Bowl LVI draws closer. Thanks to a couple drawn out notes Guyton’s rendition sees to have gone over 1:42. That’s the 8th time in the […] 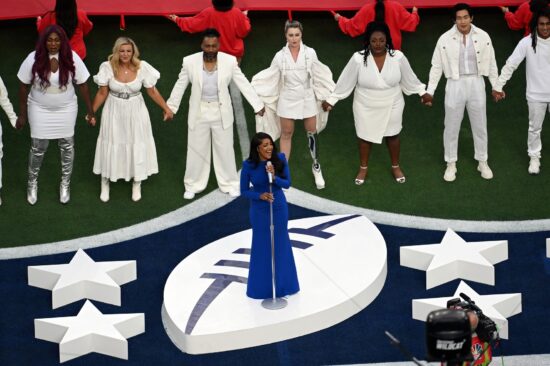 Stafford entering into final year of deal next season Super Bowl result could impact extension Even with the outcome of Super Bowl LVI still unknown, the NFL Network’s Ian Rappaport has already reported that the Rams and QB Matthew Stafford will entertain contract extension talks this offseason. Stafford has led Los Angeles to the championship […] 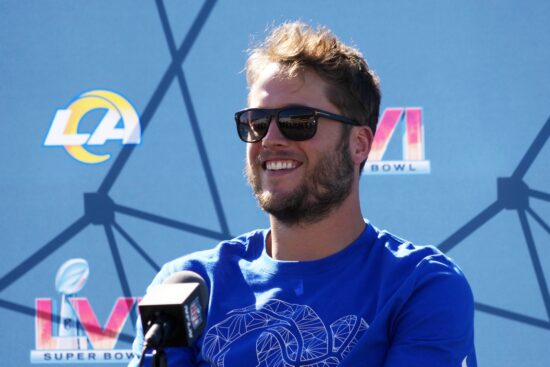 Warriors star taking the Bengals. Curry will be at the game. Scheduling has worked out for Steph Curry and the Golden State Warriors, who play the Lakers on Monday and flew into Los Angeles on Sunday. That itinerary has allowed Curry to attend Super Bowl LVI, and he’s not shy about telling you who he’s […]

Odell Beckham Jr. had joined the Los Angeles Rams earlier this season with his first game being played on November 15. In those eight games with the Rams, Beckham Jr. has started seven. Overall he has been targeted 48 times with 27 receptions for a total of 305 yards while catching five touchdowns, with a […] 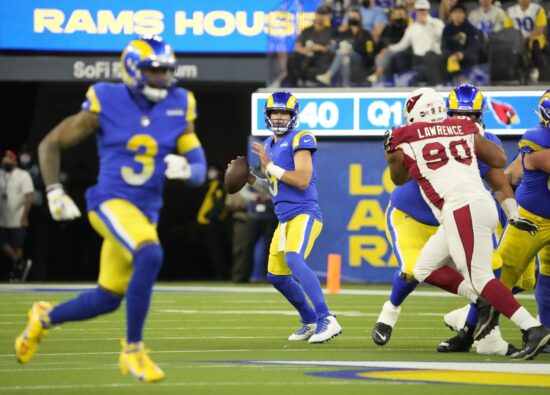 The temperature in Los Angeles is supposed to be right around 85° for Super Bowl Sunday, perfect for somebody who likes ‘fair weather’ such as entertainment superstar Drake to make headlines. The rapper is in the news heading into the weekend after it was reported that he’s making around $1.25 – $1.3 million in wagers […] 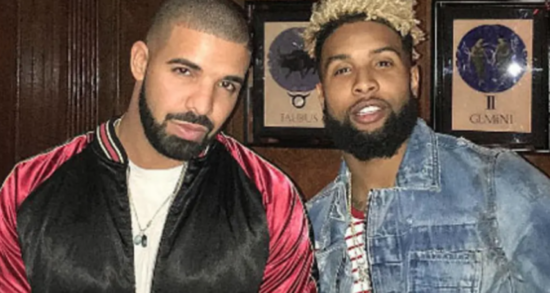 The 2021-22 NFL campaign wraps up on Sunday with the biggest sports event in America – Super Bowl. As we’ve already covered the Cincinnati Bengals vs Los Angeles Rams game, it’s time to move to Super Bowl LVI props. In this post, we’ll focus on MVP odds. So, who’s most likely to win the MVP […] 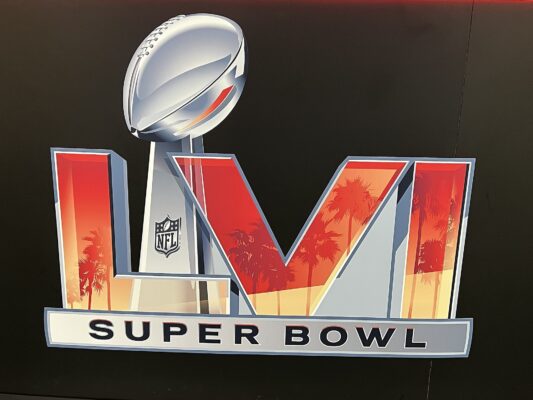